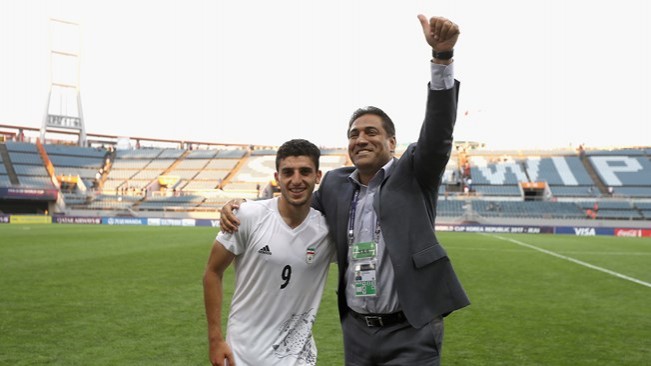 FIFA - For some families, sport is clearly in the blood. When it comes to the Peiravanis, you will be hard-pressed to find many better examples.

Amirhossein Peiravani is currently the helm of an Iran side on the brink of their best-ever FIFA U-20 World Cup, but he arrives from quite the sporting stock. One of eight brothers in total, three of the Peiravani siblings have shone in Iranian football.

The eldest of the trio, Gholam – 16 years Amir’s senior – has gone from seasoned defender to revered coach, while younger brother Afshin appeared at FIFA World Cup France 1998™ before going on to manage the likes of Iranian giants Persepolis.

And while the trio have seen their footballing family tree branch off in differing directions, they enjoyed a brief spell where their sporting paths all intersected as the “very influential” Gholam’s playing career was winding down and the younger pair’s was just beginning. “The three of us managed to play together at Bargh Shiraz in the Iranian Premier League,” Amir told FIFA.com.

“[Gholam] was at centre-back, Afshin at right-back and I was in defensive midfield. It was great for fans to see three out of the 11 players being brothers. When we first went our separate ways to different teams it was very hard for us to play against each other, but you have to put fraternity aside for football.”

Duels in the dugout

From all competing on the field, they would then go on to square up on the sidelines too, with the family at one point occupying a sixth of all the managerial positions in the Iranian top flight. “Everyone respects [Gholam] as a coach, and our family, as he is seen as something of an icon and moral role model in football,” Amir explained, following his brother’s long spell inspiring modest outfit Fajr Sepasi.

Amir played the role of assistant to his older sibling as part of the Iran U-23 outfit that finished fourth at the 2010 Asian Games in Guangzhou, a team he is set to inherit come the end of Korea Republic 2017. With their football seemingly in healthy shape – Iran head to the FIFA U-17 World Cup in India and Russia 2018 is within sight for the seniors – he will no doubt infuse that squad with the same organisation and solidity he has looked to instil in the U-20s.

“I have always been a disciplined coach, that’s how I get my message on to the field,” he explained. “Two things are key for me when coaching my teams: one is belief, the other is effort. With today’s connected world, techniques and tactics have become a more commonplace matter, but these two things are really important. They have been key to raising our level [here].”

Beyond the three brothers’ exploits, the Peiravani’s sporting lineage is set to continue. Amir’s daughter is an Asian-level medal-winning rower, while his nephew swam in the Youth Olympics. Therefore, however Iran fair in Korea Republic, chances are good there will be plenty more additions to the family trophy cabinet.