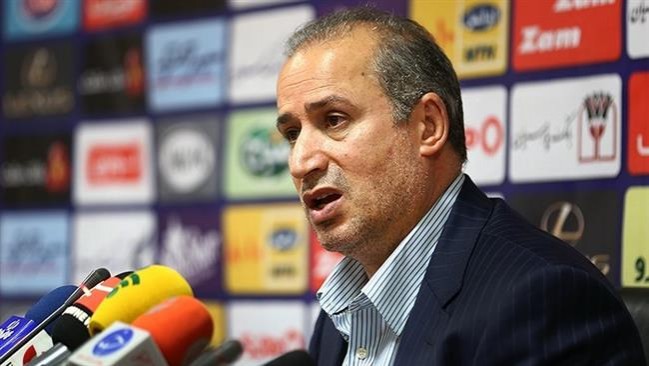 Presstv - President of the Football Federation of the Islamic Republic of Iran (FFIRI) Mehdi Taj says Iranian professional football teams will withdraw from the Asian Football Confederation (AFC) Champions League in case the Asian football's governing body reneges on an earlier decision that Iranian and Saudi Arabian teams should not meet each other in neutral venues.

“During the AFC Competitions Committee session in the Japanese capital city of Tokyo on Friday, I stated that profits from ticket sales have dropped dramatically as a result of March ruling and persistence on the decision would be the detriment of football fans and the continental tournament. The Saudi representative, on the other hand, simply alleged that it is not safe to play in Iran,” Taj said on Saturday evening.

He added, “I stressed there are representatives from Australia, Japan, China, Qatar and South Korea in this session, whose teams have faced Iran in the 2018 FIFA World Cup qualification games. Iran even hosted Iraq qualifiers. These sports officials and their teams have travelled to my country, played there and returned without a slight hitch.”

The senior Iranian official said while Saudi and Emirati football federations have threatened to withdraw from AFC Champions League if the AFC Executive Committee decides that Iranian and Saudi Arabian clubs don’t need to play each other in neutral venues.

“Iranian football clubs will pull out of Champions League contests if the AFC votes against the Islamic Republic as Tehran would consider such a move as gross injustice against Iranian and Asian football,” Taj pointed out.

Iranian and Saudi football federations have been at loggerheads following the severance of Tehran-Riyadh diplomatic ties earlier this year.

A small group of people mounted the walls of the Saudi consulate in Mashhad while incendiary devices were hurled at Riyadh’s embassy in Tehran. Iranian authorities apprehended some 50 people over the acts of transgression, and condemned the violations of the diplomatic perimeters.