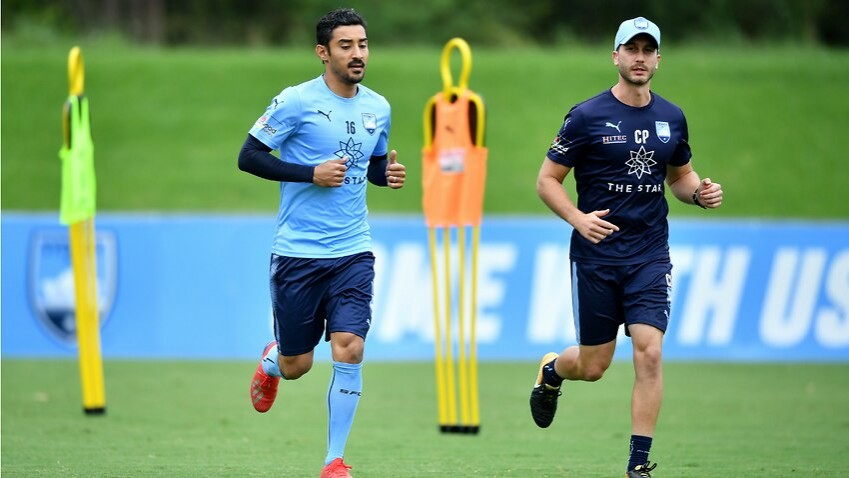 Theborneopost - WITH his World Cup and European pedigree and ‘Gucci’ nickname, Iranian forward Reza Ghoochannejhad is hoping to bring a touch of class to Australian giants Sydney FC in their 2019 AFC Champions League (ACL) campaign.

The 31-year-old joined the three-time Aussie champions at the end of January, on-loan from Cyprus club APOEL FC.

He scored his first goal in his fourth A-League appearance in the 2-0 win against Adelaide United on March 1.

And on Wednesday, he was a member of the Sydney FC side who began their ACL campaign with a 0-0 home draw with Ulsan Hyundai, of South Korea.

“Sydney FC is the biggest team in Australia, and one of the better teams in Asia. When I heard of the interest from Sydney, I was drawn because of the club, the adventure and the country,” Ghoochannejhad said.

“I’ve been here before in 2015 (for the Asian Cup) so I’ve had some great experiences with Australia and I knew what to expect.

“It’s an opportunity for me to show my skills here, and great for me and my family to be in Australia.’’

A speedy striker with a polished finish who takes the AFC player spot at Sydney FC, Ghoochannejhad seems like a perfect fit, with his near-perfect English and growing partnership with fellow import Adam le Fondre.

The pair faced each other in the English Championship when Ghoochannejhad was at Charlton and Le Fondre played for Reading and Cardiff City.

The Iranian scored only five times in 42 appearances in two years with Charlton, but would have a more successful spell at Dutch club, Heerenveen.

In the 2016-17 season, he was the Eredivisie’s third-highest scorer with 19 goals in 34 matches, and grabbed a memorable hat-trick away to PSV Eindhoven as he made the league’s team of the year.

He’s the first Iranian to play in the A-League, and the nation’s sizeable Persian community has already made him feel welcome: “They contacted me through social media, and keep in touch with me. I hope that I can make them proud again.”

The Gucci moniker was introduced early in his career when fans decided it was catchier than his four-syllable family name.

At different times over the past decade or so, Iran and Australia have been Asia’s top-ranked nations (Team Melli are currently No. 22, with the Socceroos at 42nd).

But their rivalry predates Australia’s entry to the AFC in 2006 when they were still part of Oceania.

In an inter-confederation playoff for the last spot at

France ‘98, Iran famously came from 2-0 down in Melbourne to draw 2-2 (after a 1-1 draw in the first leg in Tehran), advancing to their second World Cup finals on the away goals’ rule.

Just 10 years old at the time of Iran’s last meeting with Australia, Ghoochannejhad has mostly positive memories of the World Cup.

He scored the winner in a qualifier against South Korea to book his nation a spot at Brazil 2014.

And he netted Iran’s only goal of that tournament in the 3-1 loss to Bosnia.

“That’s a goal that no-one can ever take away from you. I’ll cherish it for the rest of my life,’’ he said.

Despite being selected in the squad by Carlos Queiroz, Ghoochannejhad didn’t see a single minute of playing time in Russia, falling behind Zenit St Peterburg’s Sardar Azmoun and Brighton’s Alireza Jahanbakhsh in the pecking order.

Even so, Ghoochannejhad has no regrets about his international career – he scored 16 goals in 44 appearances – and his decision to play for his birth nation, having lived in the Netherlands after the age of four.

He earned caps for the Dutch age-group teams, including three appearances and one goal for their Under-19s.

He came through Heerenveen’s youth academy, and also had stints in Belgium, Kuwait and Qatar, in addition to England and Holland.

“I played against many good players from Ibrahimovic to Messi – those are the big names that everybody knows.

“Those are players who will always be remembered. Those moments are unforgettable for me,” he said.

While the A-League no longer has household names like Dwight Yorke, Emile Heskey and Alessandro Del Piero, Ghoochannejhad is likely to cross paths with Oscar and Hulk when Sydney FC face Shanghai SIPG in the ACL next month.

It’s his second stint in the regional showcase after a stint with Kuwait SC in 2014.

“It’s a great feeling to be part of the team to play in the ACL, and an opportunity for me to show my skills here. It’s a great adventure,’’ he said.