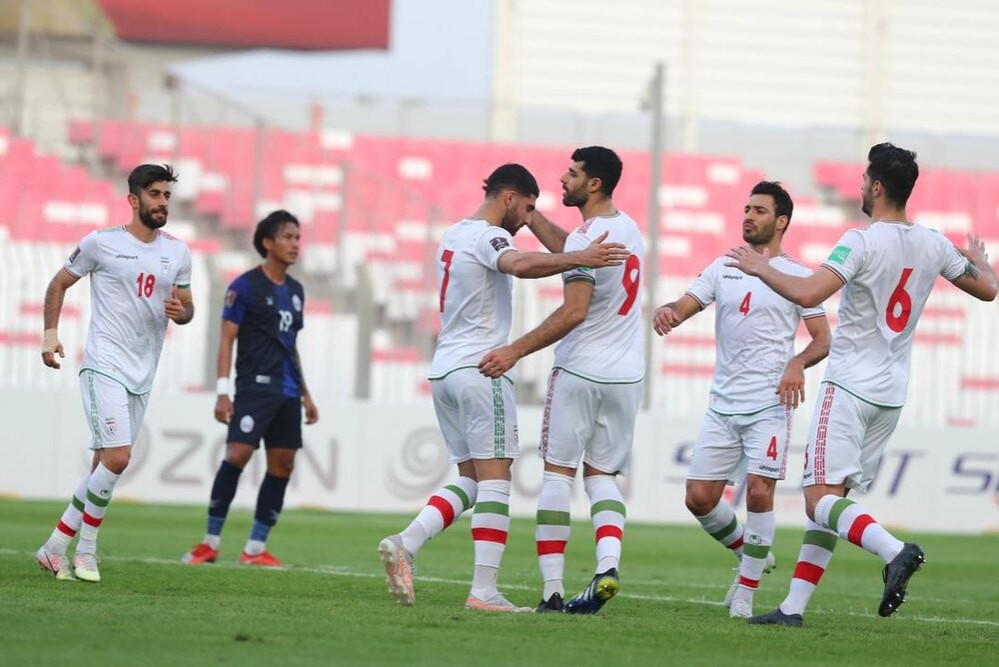 AFC - Islamic Republic of Iran took provisional pole position in Group C of the Asian Qualifiers for the FIFA World Cup Qatar 2022 and AFC Asian Cup China 2023 with a 10-0 win over Cambodia on Friday.

Iran head coach Dragan Skocic made six changes to the starting line-up that had defeated Bahrain 3-0 in their previous match, but there was no disruption to service as the Central Asians took a firm grip on the match.

Cambodia, however, showed determination in the opening minutes but suffered a setback in the 15th minute when Iran were awarded a penalty after defender Sor Rotana’s foul on Alireza Jahanbaksh (pictured below, right), and the Iran skipper made no mistake in converting the spot-kick.

Iran continued to press and were rewarded again with Shojae Khalizadeh rising highest to head home a corner kick in the 22nd minute, before Mehdi Taremi (pictured below, left) got into the goalscoring action with a half-volley to make it 3-0 five minutes later.

Iran’s fourth goal came through Rotana deflecting Milad Mohammadi’s cross past custodian Keo Soksela in the 32nd minutes, with the inside of the crossbar denying the Central Asians a fifth before the break as Saeid Ezatolahi's penalty rebounded off the woodwork.

Iran maintained a high tempo in the second half with Mohammadi etching his name on the scoresheet in the 57th minute, courtesy of Mehdi Ghayedi’s superb through pass, before Morteza Pouraliganji headed home a corner six minutes later.

Cambodia's desperate defending led to another Iran penalty in the 77th minute, with Karim Ansarifard slotting home to make it 7-0.

There was no stopping Iran’s quest for goals, with Kaveh Rezaei becoming the seventh Team Melli player to find the back of the net after heading in Sadegh Moharammi’s cross in the 80th minute, before Ghayedi displayed his dribbling talent in the box before beating Soksela from close range.

Rezaei bagged his second of the night in the 87th minute as Iran completed an emphatic win and set their sights on Iraq.