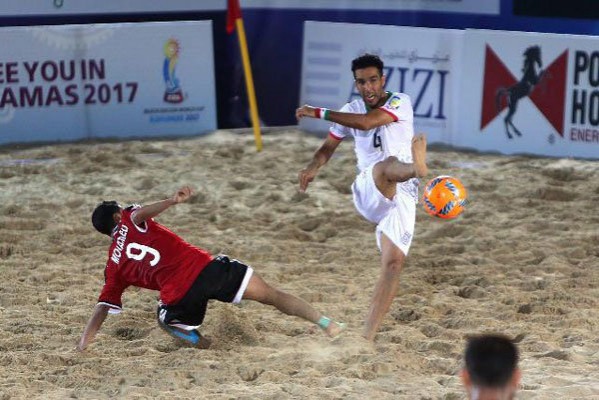 Tehran Times - Iran’s group in 2017 FIFA Beach Soccer World Cup in Nassau, Bahamas is manageable, but by no means easy.

Iran have been drawn in Group B along with Mexico, Italy and Nigeria.

As sixteen of the world’s best beach soccer teams converge on the Bahamas for the prestigious competition, the-AFC.com takes a look at Asia’s three representatives at the global showpiece.

Head coach Mohammad Mirshamsi’s side booked their seventh appearance in the global finals by capturing last month’s AFC Beach Soccer Championship in Malaysia, comfortably accounting for United Arab Emirates with a 7-2 win in the final.

Iran scored an impressive 50 goals at the Kuala Terengganu event, 12 of them coming from tournament MVP Mohammad Mokhtari, and they are now targeting a FIFA Beach Soccer World Cup semi-final appearance after reaching the last eight in the two previous tournaments.

On both occasions, Iran’s competition came to an end in narrow defeats to teams which went on to reach the final. In 2013 they lost 6-5 to eventual champions Russia, while two years ago in Portugal they were eliminated 5-4 by a Tahiti side which fell only to the host nation. It is a measure of IR Iran’s progress that they defeated both sides at last November’s Beach Soccer Intercontinental Cup.

Iran’s group in Nassau is manageable, but by no means easy; Italy are fourth in the world rankings, while Mexico and Nigeria both finished as runners-up in their respective continental championships.

They begin their campaign against a Mexican side that they beat 3-2 at the same stage of the 2015 FIFA Beach Soccer World Cup, before meeting the highly-rated Italians two days later.