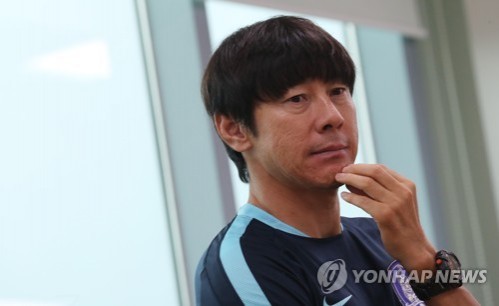 Yonhap - South Korea football coach Shin Tae-yong said Wednesday he thinks Iran are similar to European teams as his squad was gearing up for the World Cup qualifier at home later this month.

Shin's side has been training at the National Football Center (NFC) in Paju, north of Seoul, since Monday for South Korea's last two matches in the final Asian qualifying round for the 2018 FIFA World Cup. The Taeguk Warriors, currently second in Group A, the last automatic qualification spot, are scheduled to host already-qualified Iran on Aug. 31, and will take on third-placed Uzbekistan five days later.

For their first opponents Iran, currently the top-ranked Asian team in FIFA rankings at No. 24, Shin said he doesn't think Iran are a typical Middle Eastern team.

"I must say Iran are not the same as other teams in the Middle East," Shin said to reporters at the NFC. "They have their unique power and speed. They're much more like European teams."

South Korea, ranked No. 49 in the world, have not beaten Iran since 2011, suffering 1-0 losses to Iran in their last four meetings. The national team also has an inferior overall head-to-head record with nine wins, seven draws and 13 losses.

"We can't allow an opening goal to Iran," he said. "We must score first, so that we can prevent the opponents from messing with our mind."

Iran are scheduled to land in Seoul on Saturday, which is earlier than the usual arrival time for international matches. Shin said he doesn't care about Iran's early arrival and said he has been analyzing Team Melli since he took the helm of the national team last month.

"I've already finished setting up my defense plan against Iran," he said. "I just have to work with my players (to execute the plan) when our full squad gets assembled next week. And, of course, I could change my plan depending on the players' fitness."

With the arrival of Guangzhou Evergrande defender Kim Young-gwon, there are now 17 players at the NFC. Nine other players, including Europe-based Son Heung-min and Hwang Hee-chan, will join training next week.

The national team didn't have outdoor training on Wednesday, as Shin explained that the players needed some rest after their club duties. The players have been training with GPS metrics to track their movements and monitor their fitness level.

"These players are motivated and even if they're tired, they train hard with intensity because they came to the national team after a coaching change," Shin said. "I thought keeping up our training today could be actually harmful to the players, so I decided to have indoor training with a focus on recovering their energy."

If South Korea qualify for the 2018 World Cup, the Korea Football Association said they will try to schedule friendly matches in Europe in October. Shin said if it happens he wants to meet stronger teams than his side.

"I don't want to meet a team that is at the same level with us," he said. "Through friendly matches, we need to know where we are. It should be a learning process."