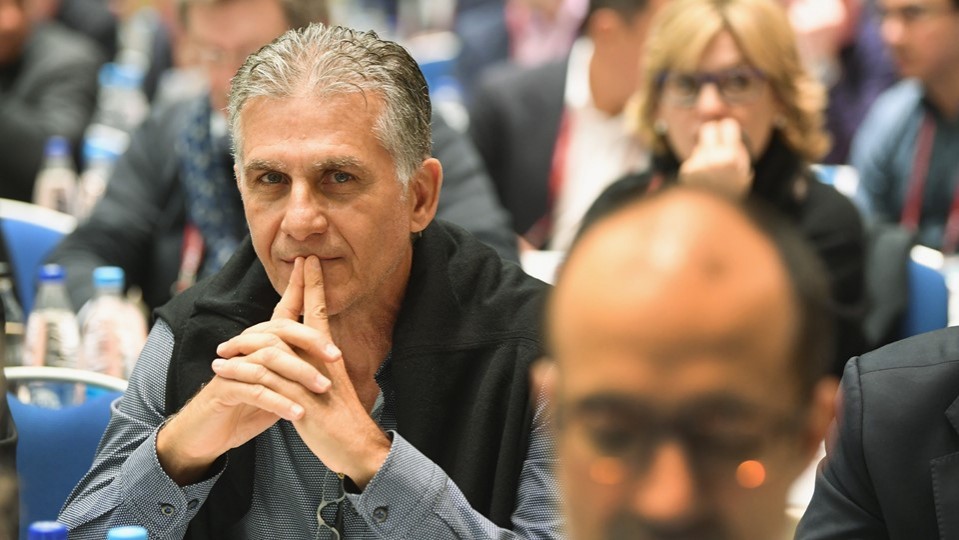 FIFA - IR Iran are all set to make their second consecutive FIFA World Cup™ appearance in a few months, the first time they will have graced two world finals in a row. And as was the case at Brazil 2014, the Iranians will have Carlos Queiroz at the helm. The experienced Portuguese coach is currently in Sochi attending the Russia 2018 Team Workshop, where preparations for the tournament are being finalised. “It’s essential for us to have detailed information on the technical aspects of the World Cup and how it’s going to unfold,” said Queiroz.

Absent from the big stage for eight years, Team Melli made their return to the world finals four years ago and built on that achievement by becoming the first Asian team to book their place at Russia 2018, following a near-perfect qualification campaign.

Looking ahead to the competition, the Iran coach spoke exclusively to FIFA.com about the new challenges facing his side and the test they will face in a tough Group B, where he will come up against his compatriots, having coached them at South Africa 2010.

FIFA.com: What is the team hoping to achieve in Russia? Iran are making their second World Cup appearance in a row, which means there will be more pressure on them.

Carlos Queiroz: Iran have come on a lot. With the experience of Brazil 2014 under our belts and with several players having since moved to Europe, we’ve become more solid and competitive. Playing in the Asian leagues is not the same as playing international football. We’ve become a better side. We’re the best Asian team in the FIFA Ranking, we didn’t lose a game in the qualifiers, and we only conceded a couple of goals. That’s why we’re going to Russia with a very clear dream in mind.

What is that dream?

We want to get through to the second round, but that obviously going to be a very difficult task. Everyone’s agreed that we’re in the hardest group at the World Cup, as we’ll be coming up against two title contenders in Spain and Portugal. But our duty is to go and improve on past performances and to keep making progress, not just at Russia 2018 but at the upcoming Asian competitions and the next World Cup qualifiers. The objective is to go through to the knockout phase, though we need to prepare the right way if we want to do that.

Do you feel a little strange about taking on Portugal?

I prefer to think that we’re taking on Spain and playing Portugal (laughs). As a Portuguese coach, I think that playing against Portugal is an opportunity and a very special moment both for me and my players. It will be interesting to play them and Spain and Morocco. It’s going to be a very attractive group at this World Cup.

Talking of special moments, what will it mean to you to have Cristiano Ronaldo on the other side of the pitch?

It’s going to be special, as it always is when you take on great players. In this case, it’s the best player in the world. But when the match starts there are just two teams who are trying to win. Football will decide who wins the day and who was better on the field of play.

What memories do you have of Cristiano? Your paths have crossed many times.

The memories stay with you, of course they do, especially in shared projects, like we had at Manchester [United] and the Portuguese national team. That was a long time ago, though. The South Africa World Cup was a few years ago now. Times have changed and now I’ve got other Ronaldos with me. They’re important players… the likes of [Alireza] Jahanbakhsh, [Reza] Goochannejad, [Ali] Karimi, etc. These are the Ronaldos I’ve got to look after now and who I’ve got to pay attention to achieve the success we all want.

You came up against another great player in Lionel Messi at Brazil 2014, and you know to your cost how players of his ability can punish a momentary lapse in concentration… (Interrupts) I’ve always said that Messi is an extraordinary player. He’s out of this world. If he were human, he wouldn’t have had that magical moment in that match (Argentina beat Iran in the group phase with a late Messi goal). I don’t usually like losing, but I didn’t come away from that defeat with a negative feeling. It’s when something magical like that happens that you know that football is alive and kicking, and that’s why it’s one of the best sports in the world to watch. And it’s even more of a special moment when it comes from a player who shouldn’t be allowed to play by FIFA until it’s proven that he’s actually human!

One last question, and seeing as we’re in Russia: how important is it for you to be able to count on players who play their club football here (Sardar Azmoun, Saeid Ezatolahi and Milad Mohammadi)?

It’s very important, no question. It’s all part of the development process for Iranian players. In 2011 we had just the one player based in Spain, but now we’ve got nearly 60 percent of the starting line-up playing in Europe, three of whom happen to be in the Russian league. This is going to be important for the team because it’s going to build our knowledge and give us more of an affinity with the Russians. That just shows you all the different ways in which Iranian football has progressed over the last eight years.