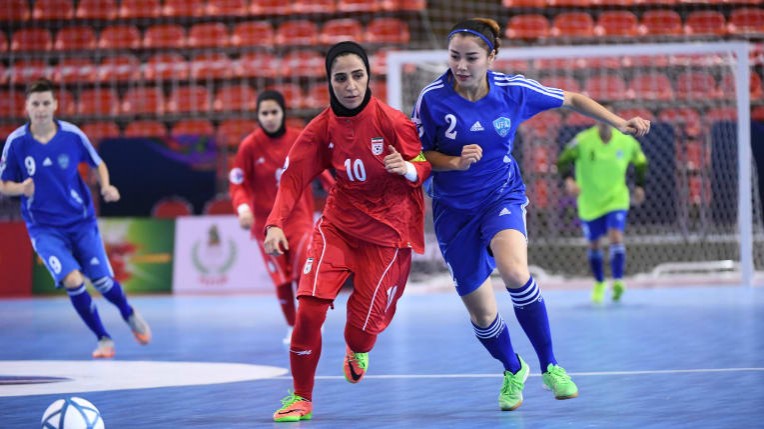 AFC - Three goals in the first three minutes helped Islamic Republic of Iran confirm their status as Group D winners as they registered a 9-2 win over short-handed Uzbekistan at the AFC Women’s Futsal Championship 2018 on Monday.

The reigning champions will now face China PR in Wednesday’s quarter-finals, while Uzbekistan will regroup ahead of their meeting with Japan.

Playing against Shahrzad Mozafar’s team is never easy, but Uzbekistan’s task was made considerably more difficult by the absence of their two specialist goalkeepers, who were both shown red cards in their previous match against Turkmenistan.

Field player Iradahon Turdalieva stepped into the breach and conceded after just 19 seconds when Tanzilya Zarbieva’s attempted block flew into her own net.

Sara Shirbeigi’s deflected effort doubled the lead a minute later and when Fereshteh Karimi fired in a simply unstoppable free-kick, and it was 3-0 to Iran in the blink of an eye.

That signalled the start of Avaz Maksumov’s utilisation of Maluda Munaraova as a floating goalkeeper whenever Uzbekistan took possession of the ball. The ploy worked insofar as the Iranian goal rush temporarily ceased while the Uzbeks enjoyed far more possession.

Iran added a fourth goal when Fatemeh Etedadi pounced on a loose ball after Turdalieva spilled a shot in the 10th minute, before Uzbekistan created some reasonable scoring chances - and one excellent one for Lyudmila Karachik - late in the first half.

Uzbekistan were made to pay for their extensive use of power plays when Shirbeigi found the empty net after winning possession deep inside her own half four minutes into the second period, and Fatemeh Arzhangi made it 6-0 when she teamed up nicely with Arezoo Sadaghianizadeh a minute later.

Despite the heavy deficit, Uzbekistan showed glimpses of their quality and they were rewarded for a strong spell when Rushaniya Safina turned to drive home a 30th minute goal.

Safina had a great chance to score again moments later, but Iranian goalkeeper Farzaneh Tavasoli produced the crucial intervention when the 25-year-old opted to pass instead of shoot.

The six-goal lead was restored when Shirbeigi once again brilliantly fired into the empty net from long range to complete her hat-trick in the 32nd minute, then extended by Etedadi two minutes later after another loss of possession was punished.

While Iran’s goals were piling up, so too were their fouls. Their sixth for the half gave Maftuna Shoyimova the chance to score from the second penalty spot, which she took in the 38th minute.

Tavasoli saved Shoyimova’s repeat effort after another foul a minute later, before Fereshteh Khosravi’s back post tap in rounded out the scoring at 9-2 in the closing moments.

“We did expect Uzbekistan would make the power play due to the situation with their two goalkeepers, so in our last training session we really worked on that, both in attack and defence. We were ready for that. I think it was a good strategy for Uzbekistan to reduce the score. If they had their goalkeepers maybe it would have been a totally different game."

“Without our goalkeepers, we made the plan before the match to use the power play. Futsal is really improving in Europe and the world and many teams, like Kairat, Barcelona and sometimes Brazil, now use power plays because most teams know how to defend with four against four, but five against four makes things a little bit difficult, and it gave us a chance to score.”