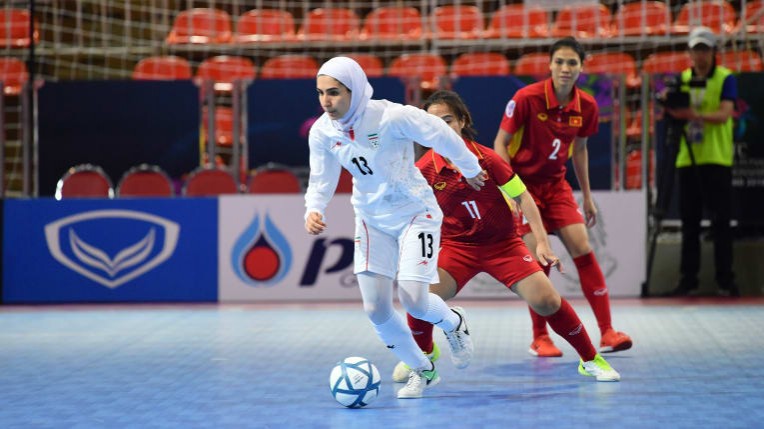 Already an Asian champion in Malaysia in 2015, Etedadi has lit up the courts of Thailand with nine goals in just four games to help the reigning champions reach a second consecutive decider against Japan.

After going scoreless three years ago, the 29-year-old opened her account at the 2018 continental championship with a four-goal haul against Turkmenistan, before scoring a double against Uzbekistan, a crucial strike against China PR and two more in the semi-final against Vietnam.

She is now in pole position to win the tournament’s top scorer award, although Japan’s Anna Amishiro and Thailand’s Sasicha Phothiwong remain in contention with eight goals apiece.

Etedadi said her scoring success is the result of hard work and the extension of excellent run of domestic form.

“I was the top goal scorer in Iran leading up the tournament and I have continued it here,” she said.

“I did a lot of planning for this tournament, and I’ve tried so hard in all the matches. I always try my best for the team and the country rather than because of a desire to score personally.”

A team-first attitude is a common theme for Etedadi. While she has been the goal scoring hero in Bangkok, she says team success has always been her objective.

“When I started playing futsal at the age of 15, the goal for me was reaching the national team and the second goal was being the best team in Asia,” she revealed.

“Now the final goal is becoming one of the best teams in the world.”

Iran has long-been an Asian futsal powerhouse. Their men’s national team have dominated the AFC Futsal Championship, winning the competition 12 of the 15 times it has been staged, but Etedadi says the success of the women’s side has changed the face of the game back home.

The success of 2015 was a circuit-breaker in terms of recognition for ability of the nation’s female stars, and Etedadi is acutely aware of the impact their achievements have on future generations.

“The last title was really inspiring and now women’s futsal is big and well-known in Iran. Before that there was nothing,” she said,

“People really showed appreciation the last time when we won, and everybody – girls, boys, all the young people were inspired."

“Many girls in Iran are inspired because these girls (the Iran team) are so inspiring.”