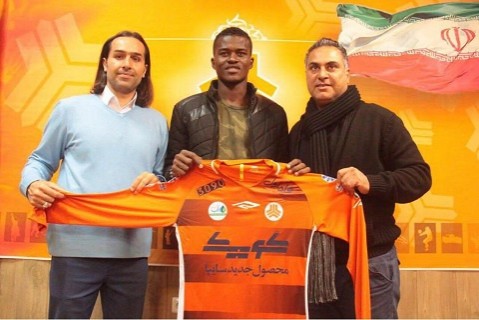 The 27-year-old joined Iranian side Saipa FC on a one-and-a-half-year deal from Ghanaian top flight club Liberty Professionals prior the ongoing campaign after his impressive displays for the Dansoman-based side - where he netted 7 goals in 26 appearances to help the club escaped the drop.

The hard-tackling defender was rewarded with a debut call-up into the Black Stars for the double header friendlies against Mexico and USA after playing a key role in the Black Stars B team that clinched the 2017 WAFU Nations Cup.

But after tasting the Ghanaian league and the Iranian top flight league, Sarfo was asked to choose the better of the two, which he embraced the latter as the professionally-run league.

"There are so many factors that goes into it when comparing the Ghana Premier League and the Pro Persian Gulf League because infrastructure-wise and the kind of sponsorship that goes into the Iranian league is much bigger than the Ghana league," Sarfo told Happy FM.

"However, when you're looking at it from talent-wise, I can say the Ghana league is far ahead but we don't know how to manage them. But for Iran to have qualified for Russia 2018 World Cup should tell you where their football has gotten to, so I think on the whole they are ahead of us."

Sarfo played seven games in 10 games for Saipa FC as they finished 4th on the standings.