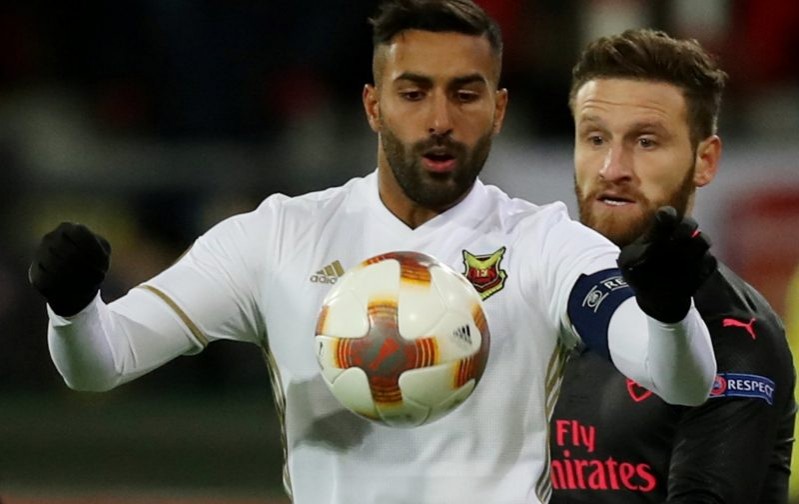 Vitalfootball - It has been widely reported that Graham Potter will be named Swansea City manager in the near future, but recent reports are suggesting that he won’t be the only one making the trip flight from Sweden to Swansea this Summer.

One of Potter’s key men at Ostersunds, Saman Ghoddos, has been linked with a move to SA1 in recent days – but you’d be forgiven for not having the slightest clue who he is!

And while I’m by no means an avid spectator of Swedish football, I have taken a look into his time in Sweden and put together a brief summary of the man who could well be donning a Swansea shirt next season.

So, without further ado…

A versatile attacker, Ghoddos has been a central figure in Ostersunds’ rise through the Swedish football pyramid. Having joined on a free transfer in 2014, Ghoddos has been Graham Potter’s top scorer at Ostersunds for the past two seasons and is their leading scorer this season, too.

Used predominantly as a centre-forward, Ghoddos picked up two goals and three assists in an impressive Europa League run last season – two of which came in their 2-1 win over Arsenal at the Emirates, where Ghoddos was named man of the match. With a clear eye for goal. he also has an impressive number of assists to his name since joining the Swedish club.

Having grown up in Sweden with Iranian parents, Ghoddos had the choice between the two nations when pledging his allegiance. Despite being called up by – and scoring for – Sweden last January, he eventually chose to play for Iran after being left out of Sweden’s World Cup qualifying squad last Summer.

Ghoddos will be representing Iran in the World Cup, so it may well be worth keeping an eye out for him this summer. He’s previously been linked with West Ham, Leicester and Celta Vigo, so he certainly won’t be short of options next season – especially if he puts in a few solid performances In Russia.

It has been reported that Ostersunds rejected an offer of SEK 50 million (around £4m) for Ghoddos last summer with the forward opting instead to extend his contract in Sweden, however, he did admit to being keen on a move away from the club in an interview earlier this year.

Discussing the situation surrounding Ghoddos in January, Ostersunds’ chairman Daniel Kindberg said that the amount of interest for Ghoddos was not “high enough “ for him to leave the club and said he believed the forward would stick around to help stake his claim for a place in Iran’s World Cup squad. He did say, however, that “all summer transfers are better than January transfers”, indicating that the club would not stand in his way should an offer come in that matches their valuation of him.