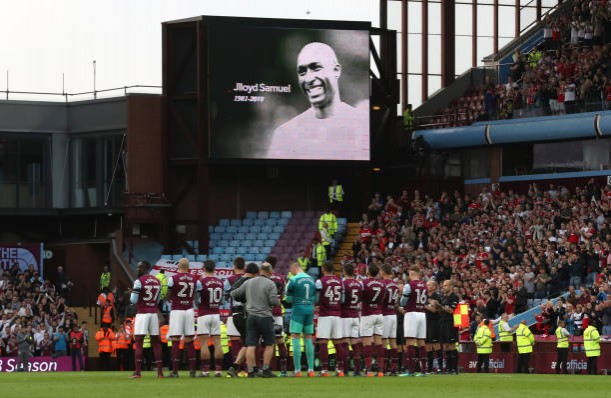 Soccity - On the 15th of May this year the tragic news was reported that former Aston Villa and Bolton defender Jlloyd Samuel had died in a car crash. Samuel is remembered mainly for his 181 Premier League appearances but in 2011 he moved to Tehran, the capital of Iran, to play in the Persian Gulf Pro League with Esteghlal Football Club. He remained at the club until 2014 before moving to another Tehran based team called Paykan where he played for another year.

Samuel initially signed for Esteghlal on a five-month contract under the recommendation of his former Bolton teammate Andranik Teymourian who had since moved to the Tehran outfit. Whilst it was not unheard of for players to move to the UAE at this time, Samuel became the first British-based player to move to Iran, a statistic he described as “a bit of history for me and Iranian football”. Despite media depictions of the Iranian capital as unstable and dangerous, Samuel reported no unrest and a welcoming atmosphere. He also talked of his interest in Iranian music and a general affection towards Iran and its football fans.

On March 15th 2012, Jlloyd Samuel grasped his first ever piece of silverware with a Man of the Match performance that saw him score in a penalty shootout to help Esteghlal lift the Hafzi Cup for the 6th time. After a six-year drought they won the cup again this year, just 12 days before Samuel’s tragic death.

The team went on to win the 2012/13 Iranian Pro League title to cap off a successful year for the former Premier League star. The 2013 AFC Champions League offered a new challenge and Samuel played a key role in Esteghlal’s journey to the semi-finals where they lost to FC Seoul.

Unfortunately, after two and a half seasons, a thus far enjoyable experience at the club came to an unfortunate end. In 2014 Samuel thanked the fans for their support but informed them via Facebook that his future at Esteghlal was in serious doubt. He had been paid less than 50% of his wages over a five-month period and after patiently waiting for a resolution he decided it was time to go. Fan tributes were numerous as the former Bolton and Aston Villa left back went down in history as one of the best players to grace the pitches of Iranian football.

This departure from Esteghlal did not spell the end for Samuel in Iran, however, as he moved to newly promoted Paykan, resulting in another year in Tehran. In recent years players have moved to increasingly unlikely destinations due to excessively lucrative contracts, the rise of the Chinese Super League and the American MLS League being prime destinations.

For Samuel, it seems the move to Iran was more about exploration and broadening of horizons and less about high wages. He compared the standard of football to that of the Championship and frequently talked of the massive fan followings and the Champions League games that filled stadiums with over 80,000 people. He also took it upon himself to learn the Iranian language (Farsi) as well as possible to try and decrease his reliance on interpreters.

Nevertheless, there were of course a few cultural clashes. For example, when he first arrived he was greeted by the sacrificing of a sheep for good luck, a ceremony that was also performed before important matches. He admitted that the tradition was hard to get used to but soon accepted it as part of the culture and he simply turned away to avoid it. Samuel was such a hit with the fans that he was given his own nickname, the “Black Diamond”, a label that to most would seem problematic but was never brought up by the man himself. He acknowledged and accepted the inevitable cultural differences and didn’t let them impact his time in Iran.

When Jlloyd Samuel left for Iran there was much less of an international football market than there is today. Whilst the transfer market has expanded rapidly to include different leagues and different cultures, it has done so due to the attraction of money. Everyone has seen the videos of Carlos Tevez walking around Chinese pitches earning £615,000 a week and everyone knows that the MLS has become a retirement home for European footballers seeking a final pay day. If a country doesn’t provide the attraction of big money then it generally doesn’t attract foreign players, yet Jlloyd Samuel proved that the jump into the unknown can be well worth the risk and perhaps this is an attitude that needs rekindling.

On top of his impressive longevity in the Premier League, Jlloyd Samuel has left behind an internationalist legacy that deserves to be talked about and should inspire footballers on the lookout for their next club to think twice before rejecting an offer from an unusual part of the globe.