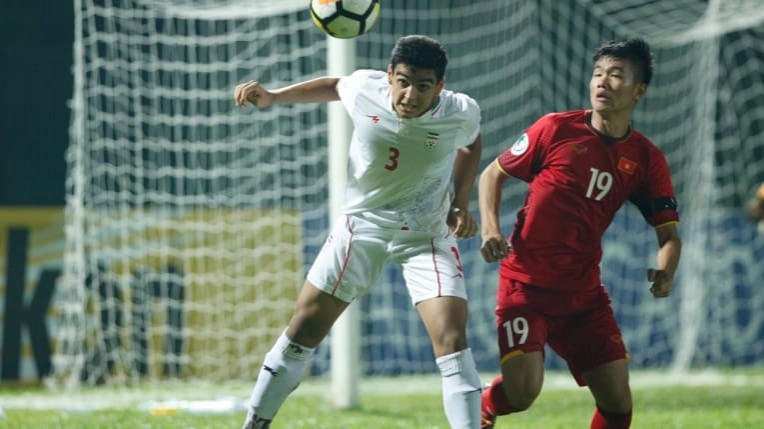 AFC - Islamic Republic of Iran were at their best as they beat Vietnam 5-0 in their final Group C tie at the UM Arena on Thursday but it was not enough to advance to the quarter-finals of the AFC U-16 Championship Malaysia 2018.

With Indonesia and India playing to a draw to finish with five points, Iran had to be satisfied with third place in the group.

Iran, who opened their campaign with a 2-0 loss to Indonesia and then were held 0-0 by India, showed their intent within the first minute through Amir Shabani’s volley that forced Vietnamese goalkeeper Nguyen Duy Dung into making his first save of the night.

Vietnam, who also only had one point to their name after a 1-0 defeat to India and a 1-1 draw with Indonesia, had some early chances but lacked finishing.

Iran, however, began to exert control and the Vietnamese defence cracked under pressure in the 17th minute when a counter-attack saw Aria Barzegar dashing down the middle before sending the ball to Amirhosseini Azizi to score Iran’s first goal of the tournament with his close range effort.

Boosted by the goal, the young Team Melli began to move with a spring in their step and doubled their advantage four minutes later with Barzegar’s strike to the bottom right corner of the net, courtesy of skipper Yasin Salmani’s through pass.

The young Golden Dragons suffered a further setback at the half-hour mark when captain Vu Tien Long was shown the red card for tugging on Salmani’s jersey at the edge of the box, and Mohammad Amin Doustali then calmly converted the free-kick with a sublime shot to the top right corner a minute later.

Vietnam fell to the Iranian counter-attack once again in the 36th minute when Salmani launched a cross over the Southeast Asian side’s backline to set up a one-on-one between Azizi and Duy Dung, and the defender calmly beat the custodian for his second of the night.

Iran continued to dominate proceedings in the second half as they held onto possession, forcing the 10-man Vietnamese side into their own half.

In the 65th minute, Salmani came close to etching his name on the scoresheet following a corner-kick, but as the Vietnamese defenders failed to properly clear his effort, Amin Doustali pounced and let loose a crackling strike to double his tally.

“First of all, I want to pay my respect for Vietnam for their fair play. We knew this tournament is a place to gain more experience. The most important thing for these young players, is the opportunity to learn and progress to the next level.

“Today we had a good start, and took the lead early. It made us relaxed. Scoring five goals shows that we are really good in offence. I’m very glad for such a result but sad at the same time because our team couldn’t reach the next stage. In such an age group, technical aspect is not everything, but it’s also about the players’ mentality. After the first game, we tried to focus on the mental preparation to fix that problem and today was the result of fixing that problem.”

“We didn’t play very well in this match, especially in the first half, and after the red card our players lost their confidence and the tempo of the game. But in the second half, we changed things up, we were more disciplined and organised, and the team spirit recovered. This is a very big tournament for me and my players, of course we made some mistakes but we will learn from those mistakes. I also think it’s very good for my coaching career and also for my players future.”