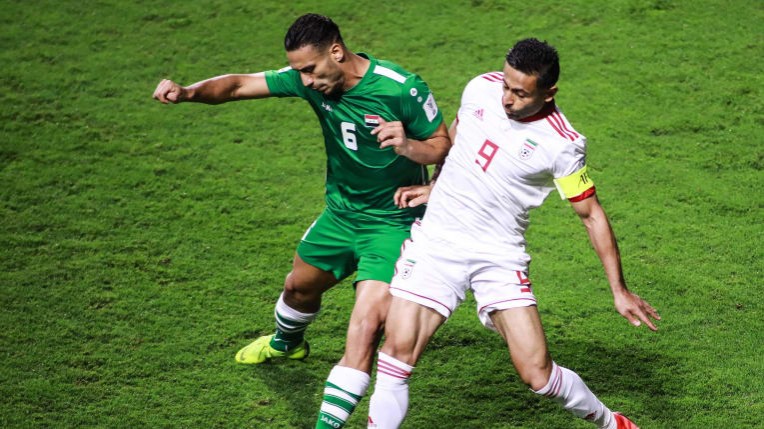 AFC - Islamic Republic of Iran sealed top spot in Group D of the AFC Asian Cup UAE 2019 after playing to a 0-0 draw with Iraq on Wednesday.

As group winners, Iran will play the third-placed team from either Group B, E or F in Abu Dhabi’s Mohammed bin Zayed Stadium on Sunday, while runners-up Iraq will face the winners of Group E - either Saudi Arabia or Qatar - in Al Nahyan Stadium on Tuesday.

Carlos Queiroz made four changes to Iran’s starting lineup, with Alireza Jahanbakhsh - who had missed the opening two fixtures - being given a chance to play before a packed Maktoum Stadium in Dubai.

Despite having secured qualification to the Round of 16, both sides adopted a high-tempo style of play, with Iran having the first glimpse at goal in the 12th minute when Vahid Amiri sent a cross into the box but Sardar Azmoun’s header was just off the mark.

Iran had the bigger share of the ball but failed to translate their possession into goals, with their attempts hardly troubling Iraqi goalkeeper Jalal Hassan Hachim and his defenders.

Three minutes from the half-time whistle, Jahanbakhsh could have broken the deadlock after latching on to Azmoun’s deflected attempt but couldn’t get his left-footed strike on target.

Iraq started the second half aggressively as they saw more possession and also continued to deny Iran with resilient defending.

Iran, in a bid to break down the Iraq defence, boosted their attacking prowess by bringing on Mehdi Taremi and Mahdi Torabi in the 63rd and 75th minutes respectively.

However, it was Iraq who nearly took the lead in the 77th minute when substitute Mohanad Ali Khadi’s header forced the best out of Iranian custodian Alireza Beiranvand, who tipped the ball over.

As the minutes ticked away, neither team was able to make headway as they settled for a share of the spoils.