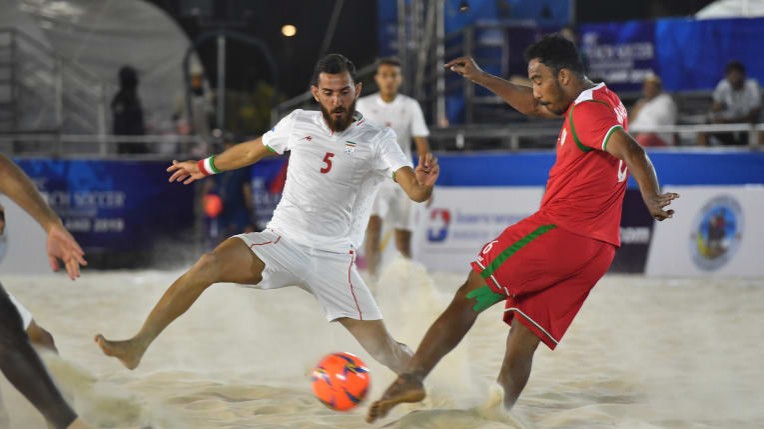 AFC - Oman confirmed themselves as Group D winners, and inflicted the first blemish to defending champion Islamic Republic of Iran's campaign, with a 4-3 win in a high-quality AFC Beach Soccer Championship Thailand 2019 clash on Tuesday.

The tie had been locked at 2-2 deep into the final period, but late goals to Sami Al Bulushi and Yahya Al Arami scored crucial late goals to give Oman what proved an insurmountable lead

Right from its earliest stages, it was a game full of entertainment and quality, with Mohammad Ahmadzadeh coming close twice in the opening 120 seconds, before Mohammad Masoumizadeh thumped in Iran's opener off the bounce in the fourth minute.

Hamid Behzadpour saved to deny Abdullah Salim's overhead kick in the sixth minute, before Mushel Al Araimi levelled the tie with an absolutely sensational volley from deep in his own half to level the tie.

Despite continuing end-to-end drama, it looked as though the sides would be level at the end of the opening period, but Jalal Al Sinani guided home Salim's cross to give Talib Hilal's side a 2-1 lead at the end of the 12 minutes. 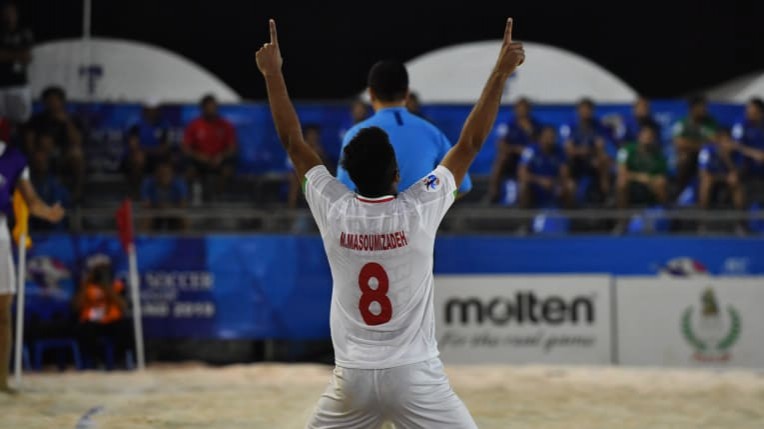 A combination of Haitham Showan and the woodwork conspired to prevent Iran from taking one of several chances early in the second period, and the holders' mood soured further Amir Akbari was a shown a yellow card, meaning he will miss the all-important quarter-final through suspension.

Iran persisted in surging forward, and a penalty kick for Masoumizadeh gave them their best chance for some time, but Showan made a brilliant save to help keep Oman's lead intact throughout what proved to be a scoreless second period.

Oman were 12 minutes away from top spot in the group, but keeping the second-best side in the world quiet is no easy task, and star goalkeeper Peyman Hosseini issued a warning when he rattled the crossbar with a volley reminiscent of his 2017 World Cup goal against Mexico.

Finally, the goal came, as Masoumizadeh atoned for his squandered penalty with an overhead volley that bounced wickedly off the sand and into the net to make it 2-2, and a superb Hosseini save from Al Bulushi's bullet ensured it remained that way moments later.

But Oman refused to be denied, and they took the lead for a second time when Al Bulushi reached a high ball before Hosseini to head it into the back of the net with six minutes remaining.

Masoumizadeh hit the crossbar with a bouncing free-kick, but Oman found a crucial fourth through a late-arriving Yahya Al Arami with just two minutes remaining to extend the lead.

Ahmadzadeh scored with 30 seconds remaining to give Marco Octavio's men late hope, but Oman held on for a famous win to top the section and send a warning to the rest of the competition.

"First of all, I thank God that we finished the game with a win, which was our target. I'm very, very happy with my boys, because they played with one of the best teams in the world. It was a tactical game, different from the first match, and we were well prepared. We did our best. The players did what I asked of them, and the win was important for us. I respect any team, so the next match won't be easy for us. I will never underestimate any team in this competition. We'll have one day of rest to prepare my team for the match against Bahrain. I also thank Iran's coach and their team. They gave us a hard time, but we dealt with that, so I am very, very happy with my players and so is everyone in Oman. Now we are focused on going further."

"It was like a final. It was two teams with very good technical conditions and I would like to give big congratulations to Oman. They deserved to win. The people who came tonight saw a very beautiful show of beach soccer. If we were watching this from the perspective of a scout, and judging things like possession and ball control, we would say Iran was the superior team, but Oman were more efficient, and I have to congratulate them for a beautiful performance. We are still alive in the competition and we will do our best to keep on and qualify."