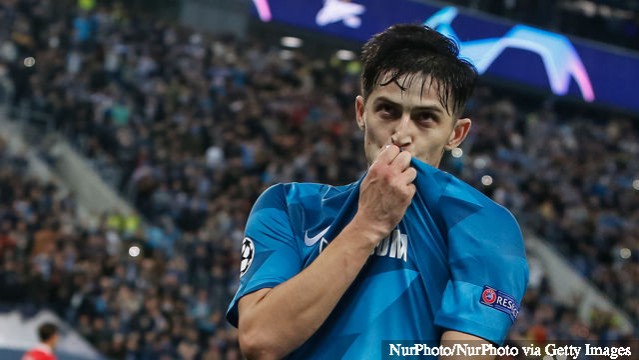 Most Celtic fans would give an arm, or perhaps a finger or two, to reach the latter stages of the Europa League this season.

It’s been far too long since The Hoops really competed on the continent and Neil Lennon has a huge challenge even plotting a way out of a Europa League group containing Lazio, Rennes and a Cluj side who triumphed 4-3 at Parkhead just two months ago.

Fortunately, Celtic have one of the sharpest young strikers anywhere on the continent now. In his third season in green and white, Odsonne Edouard is showing the sort of form that will have defenders everywhere quaking in their boots.

But, for all his qualities, and that clinical header against Cluj on Thursday, Edouard still cannot hold a candle to Sardar Azmoun when it comes to scoring goals in European competition.


According to The Mirror (22 April, page 48), Celtic wanted to sign the so-called ‘Iranian Messi’ back in the summer of 2018, shortly before he left Rubin Kazan for Zenit St Petersburg in a deal worth £10.5 million (L’Equipe).

Since Azmoun was linked with a move to the Scottish giants, he has taken his game to a whole new level, scoring five goals in just six games in both the Champions League and the Europa League. His most recent, a brilliantly taken solo effort against Benfica, sealed three points for Zenit on Wednesday night in the Champions League group stage.

In total, Azmoun averages a goal every 1.2 European games, compared to Edouard’s 2.7. But the latter still has plenty of time to improve that record.