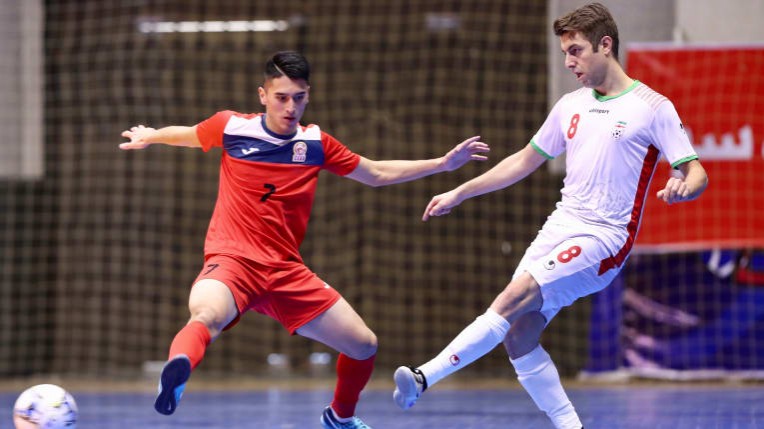 AFC - Islamic Republic of Iran completed their AFC Futsal Championship Turkmenistan 2020 Qualifiers for the South & Central Zones as group winners after an impressive 8-3 win over Kyrgyz Republic at the Ghadir Hall on Friday.

Mahdi Javid starred with a hat-trick, while Mahdi Karimi scored twice in an entertaining battle between two already-qualified teams, with nine of the 11 goals coming in an action-packed first half.

A perennial Asian powerhouse, and warm favourites in front of a 5,000-strong home crowd, Iran took less than two minutes to take the lead through Hamid Ahmadi, but Kyrgyz Republic showed they would put up a fight when they equalised through Shokhrukh Makhmadaminov’s composed finish in the sixth minute.

Ali Ashgar Hassanzadeh restored Iran’s lead from a rehearsed free-kick routine, before Karimi beat Beklobot Akmataliev at his near post to make it 3-1, but Maksat Alimov caught Team Melli napping to reduce the arrears at the 11-minute mark.

At that stage the visitors were still well within striking distance, but Iran powered away late in the first half as Javid netted a header and Taha Nematian a tap-in before Kyrgyz Republic goalkeeper Aktilek Esenaliev was shown a red card for handling the ball too far out from goal.

Kyrgyz Republic’s woes continued when Javid’s simple finish extended the margin to 6-2 in the 18th minute, although Nursultan Abdyldaev did manage to keep them in touch when he netted the final goal of a thrilling opening period by converting from a well-executed counter-attack.

The stage was set for a thrilling finale, but Iran never really looked in danger after the interval, with some blocks from both Akmataliev and the crossbar – the latter denying what would have been a beauty from Hassanzadeh - keeping the score at 6-3.

The fans inside Ghadir Hall knew the points were safe when Karimi slammed in Iran’s seventh in the 31st minute, and Javid stroked home his third for the night to confirm Team Melli’s win in the 39th minute.

Considered one of the world’s best sides, Iran have won 12 of the 15 previous editions of the AFC Futsal Championship, also finishing third at the 2016 FIFA Futsal World Cup in Colombia.