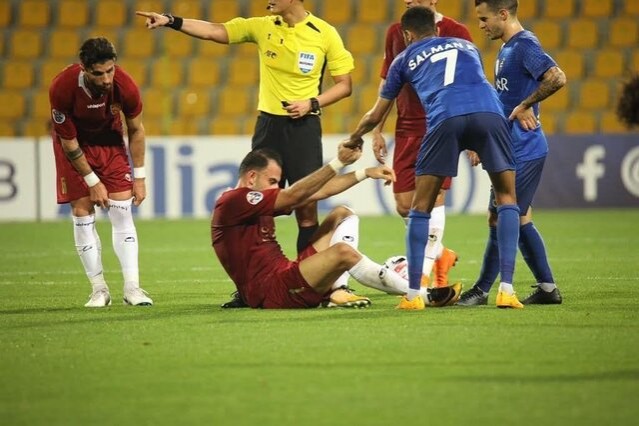 AFC - Goals from Andre Carrillo and Bafetimbi Gomis either side of the half-time break earned Al Hilal SFC a 2-0 victory over Islamic Republic of Iran’s Shahr Khodro FC at Al Wasl Stadium as the Saudis got their AFC Champions League title defence off to a winning start on Monday.

Making their 16th appearance in the competition, Al Hilal wasted no time in taking the game to their debutant opponents’ half.

Inside the first 15 minutes, Yasser Al Shahrani had side-footed wide from Carillo’s cross and Giovinco threatened from distance, shooting just wide. Giovinco forced goalkeeper Mehdi Rahmati into a top drawer save at the half-hour mark as Shahr Khodro had to weather an avalanche of Saudi attacks.

Just as Shahr Khodro thought they had survived Al Hilal’s pressure for the entirety of the first half, the title holders finally found a way through.

Giovinco cut inside from the left flank and found Salem Al Dawsari who in turn set-up Carrillo with a cushioned pass at the edge of the box. The Peruvian controlled and struck on the half-volley. A slight deflection helped Carrillo’s shot trick the Iranian goalkeeper and hit the top corner to open the scoring for Al Hilal.

Top scorer of the 2019 AFC Champions League, Gomis opened his account in the 2020 campaign in the 69th minute.

Carrillo was the architect, receiving Al Dawsari’s pass inside the box, skipping past his marker and squaring for the Frenchman to tap in from three yards to double Al Hilal’s lead.
Goalkeeper Abdullah Al Mayouf had his first chance to make an impression four minutes before the final whistle, diving low to his left to make a save at the near post, parrying Milad Sarlak’s powerful effort to keep his side’s 2-0 winning margin at the final whistle.

Al Hilal remain in Dubai where they play Shabab Al Ahli Dubai next week, while Shahr Khodro’s next adventure sees them travel east to take on FC Pakhtakor in Tashkent.