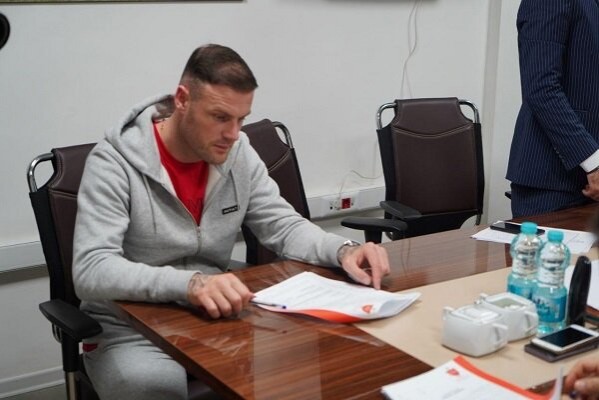 TheSun - FORMER Arsenal forward Anthony Stokes was nicked by armed cops after getting off a plane, it has been claimed.

The ex-Celtic star, 31, was arrested over an outstanding warrant at London’s Gatwick Airport as he returned from a Dubai break.

Stunned witnesses claimed he left the Emirates jet flanked by officers before the arrest.

The forward — now with Iran’s Persepolis FC — was due to appear on Monday at Hamilton Sheriff Court in Scotland.

One passenger who was on Friday’s flight said: “I heard raised voices in the cabin and we were all told to stay in our seats for them to deal with someone on the plane.

“They asked for Mr Anthony C Stokes to come to the front of the plane with his luggage.

“He was walked off and I later saw him and another man standing by the baggage belts.”

A spokesperson for Police Scotland said: “A 31-year-old man has been arrested in connection with an outstanding warrant.”

Stokes, who made one senior appearance for Arsenal from 2005-07, earlier shared pictures with Instagram followers of his stay at the luxury Palm Jumeirah Dubai hotel.

His club revealed they had no idea of his whereabouts after claiming he failed to return to training — and it was alleged he had blamed coronavirus.

It comes weeks after the Irish frontman signed for Persepolis on a six-month deal.

Amir Shafizadeh, who runs the club's Facebook page, said: “Stokes said he’s in Dubai as he didn’t join us since our last match.

“He asked our coach for permission to stay two more days in Dubai because of his family.

“Our coach agreed. We waited for him because he promised us he’d come to our training sessions.

“He hasn’t returned to Tehran for two weeks.

“After some days, he said he couldn’t come because of coronavirus.”