SportsMole - Very few of Brighton & Hove Albion's new signings have arrived with as much expectation and clamour as Alireza Jahanbakhsh did in 2018.

On the back of a World Cup, Iranians around the world rejoiced as one of their own took the step up to compete in the world's most renowned domestic league.

At the same time, Brighton fans eagerly waited for the start of the new season with fresh hope, enthusiasm and ambition after their club finished 15th in their first season of Premier League football.

Known simply as Ali to teammates, Jahanbakhsh signed for a club-record fee of around £17m. Fresh off the back of a 21-goal season for AZ Alkmaar which earned him the Eredivisie's golden boot – an honour previously won by the likes of Luis Suarez and Memphis Depay - he was more than ready for the Premier League.

However, fast-forward nearly two years and the buzz and attention has all but faded.

Over the course of the last two seasons, Jahanbakhsh has netted a total of two goals and contributed zero assists for the Seagulls, while he has only been involved in eight games this campaign.

Looking at the player's statistics, such a sharp change in output begs the question – what is going wrong for Jahanbakhsh?

The most obvious factor preventing the Iranian from reaching any kind of consistent form this season is a lack of selection. Before his first goal for the club in December, he was only given 22 minutes of playing time across all competitions despite being fit, ready and having completed a full pre-season of training.

Recently, Jahanbakhsh has not been shy to voice his frustrations on not being in Graham Potter's starting 11.

Talking to Persian Football in a radio interview during lockdown, he said: "I genuinely believe that I had the best training sessions of my life this season.

"And every day my teammates were telling me how surprised they are that I'm not getting a chance to play. I honestly think I was better than I was even in my last season in AZ and with all honesty I think I probably didn't train extremely well in only three or four sessions all season."

It is clear, at least from the player's perspective, that it is not a question of a lack of effort or ability.

While playing opportunities have been scarce this season, Jahanbakhsh has managed to deliver rare moments of brilliance, showing glimpses of the technical ability that saw him crowned the Eredivisie's best winger in 2017, aged just 23.

Having broken his goalscoring duck on December 28 against Bournemouth, Alireza shocked the Amex Stadium three days later by scoring an exquisitely timed bicycle kick, against Chelsea, to earn his team a point late on.

Following a flick on from a corner, the ball gravitated towards Jahanbakhsh inside the opposition box with his back to goal. Everything seemed to slow down for the winger as he appeared to size up the trajectory of the ball.

Before viewers could question his audacity, Jahanbakhsh had leapt into the air and made sweet contact with the ball, floating it into the bottom left corner before Chelsea's goalkeeper could even react.

Talking an interviewer through his January goal of the month-winning strike, Jahanbakhsh's eyes lit up as if he were a joyful child showing off his favourite new toy.

Yet the player's celebration immediately after the goal portrayed a deeper feeling of desperation and relief. As soon as the ball nestled into the net, Jahanbakhsh fell to his knees, his hands clutched his face as he tried to fight the tears in his eyes.

He said: "For me it was a different feeling because I hadn't played a long time and to score twice in a row is a big relief for me mentally and also physically to get back my confidence."

The moment that everyone at Brighton had been waiting 18 months for had finally arrived, and in spectacular fashion. Even Graham Potter couldn't hide his surprise – an indication that he had not been fully aware of the calibre of player at his disposal.

"I didn't predict that quality of strike but it was a fantastic goal and everyone is delighted for him," Potter admitted.

"He hasn't been involved as much as he would like but he has been fantastic around the place, he has worked hard, he has improved and he is getting his chance."

Jahanbakhsh has conceded that the relationship between him and Potter has suffered at times this season, especially prior to his run of form.

He said: "Many people do not know this but we had a few very serious arguments and unfortunately it took a long time for me to get a chance." 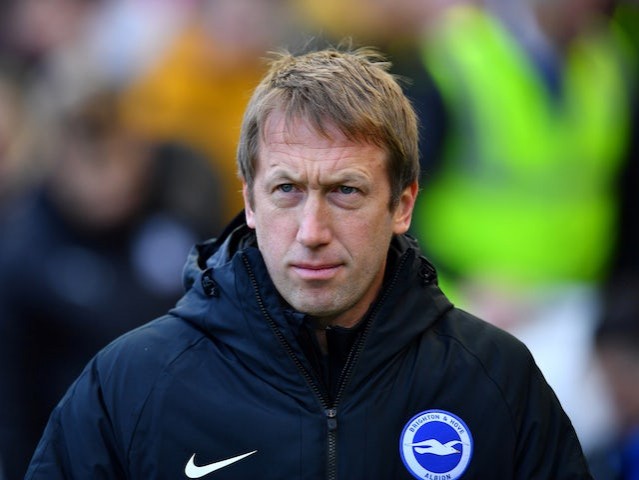 After his two goals and having earned the manager's trust, it appeared to be the perfect opportunity for Jahanbakhsh to kick on in his career in English football - but that did not materialise.

He became limited to off-the-bench appearances for the remainder of Brighton's matches until the league's suspension, regularly being called upon around the 68th-minute mark as the Seagulls struggled for points.

Their performances demonstrated the persistent problems they have faced throughout the season, where they are currently 15th in the league – a mere two points from the relegation zone.

Despite the side's more attractive possession-based game under Potter, Brighton have little to show for their progress this campaign; they have the joint-second lowest number of wins (six) in the league and with some difficult fixtures remaining, relegation to the Championship is a real possibility.

Jahanbakhsh takes responsibility for his failure in the 2018-19 season, pointing to his lack of pre-season training, injuries and Asian Cup responsibilities.

Yet, the team's overall form, specifically the lack of cohesion and an effective attacking formula, has played a huge part in the Iranian's inability to get into his stride this season.

Crucially, Potter is yet to find a formation to get the best out of his players. The Englishman has tinkered excessively with his starting lineups for each game, experimenting with different players in formations such as the 5-3-2, 4-1-2-1-2, 4-4-2 or 3-4-3.

This has stopped Brighton from developing the kind of chemistry that can be seen in clubs who have exceeded expectations like Sheffield United and Wolverhampton Wanderers.

Potter's formation choices are also to Jahanbakhsh's detriment; they often do not require wingers and so Jahanbakhsh has found himself being asked to play out of position.

Jahanbakhsh admits playing as a wing-back is not his strong point but he had been prepared to carry out his coach's request if "given the chance".

It can be said he has been too selfless in this regard, doing what the team needs of him when other clubs often choose to build around their most expensive players. Brighton's failure to do so is alarming considering they had been pursuing the player prior to his move to AZ in 2015.

At this stage, it is hard not to imagine how things would have played out had the Iranian opted to join Napoli or Leicester City, who showed interest before his move to the south coast. According to numerous sources and the winger himself, a move to Leicester City had been close to materialising but he chose the Seagulls as he felt more wanted.

How would he have fared in the Midlands, with Brendan Rodgers's side playing dangerous attacking football and utilising wing play?

For now, he is adamant he has no regrets about his decision and is eager to do well at Brighton, although it will be interesting to see whether his involvement will increase if the season resumes post-lockdown.

With Potter's future as head coach and Brighton's place in the Premier League next season still in doubt, it is uncertain whether Jahanbakhsh will take his talents elsewhere.

One thing is clear, however: should he choose to move abroad to the Bundesliga or Serie A before next season, his career in English football would be over before it has even begun.