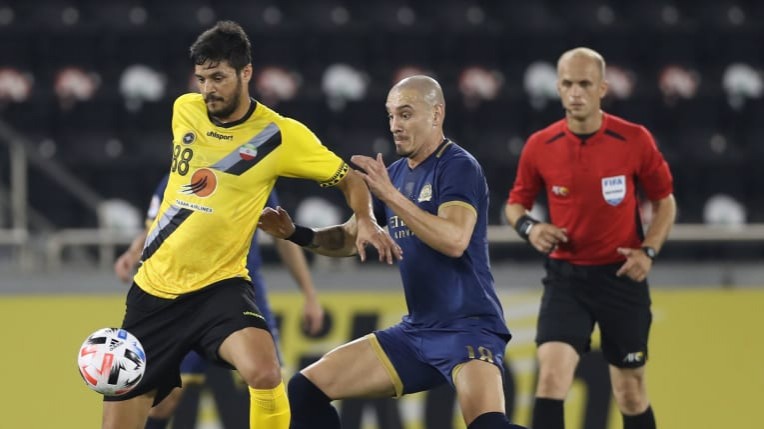 AFC - Al Nassr FC continued their charge towards the 2020 AFC Champions League Round of 16 with a 2-0 win over Sepahan thanks to a brace from Abderazzaq Hamdallah on Matchday Three of Group D on Tuesday.

The two sides went into the game with a point separating them; with Al Nassr in second place with four points needing a win to keep them at arm’s length from third-placed Sepahan.

The first half started slow, but things quickly changed when Argentinian Gonzalo ‘Pity’ Martinez, who was making his AFC Champions League debut, sent an indirect free-kick with surgical accuracy to Hamdallah’s head, the Moroccan making no mistake from six yards to put his team ahead at the half-hour mark.

With chances coming at a premium, Islamic Republic of Iran's Sepahan ended the first half with Mohammed Mohebi driving in a low cross that missed goalkeeper Brad Jones’ hands in the six yard box, but teammate Sultan Al Ghannam was present in the right place at the right time to clear before any damage could be done.

Just three minutes into the second half, Hamdallah doubled the Riyadh-based side’s lead and his own tally through tapping in a rebound that fell to him just outside the six yard box, after a magnificent solo run down the right by Al Ghannam ended with his initial shot being deflected into the Moroccan’s path.

Khalid Al Ghannam missed a golden chance to kill off the game and make it 3-0, when Hamdallah played him in on goal but with keeper Payam Niazmand only to beat, he fired wide to the stopper’s left.

With his team upping the ante in search of a goal, Mohebi found the net after rising high to head in but the referee ruled it out, judging that there was a foul in that effort. Five minutes from time, Jones was called into action when substitute Reza Mirzaei hammered in a low shot from range but the keeper was more than equal to it.

The Australian was given one last challenge - again from Mirzaei - closer to the final whistle but held the ball, as Al Nassr held on for a valuable win and a clean sheet.

With this win, Al Nassr replaced Al Sadd SC at the top of Group D on seven points, while the Isfahan based side remained in third place, two points off a qualification spot ahead of Matchday Four’s reverse fixture on Friday.