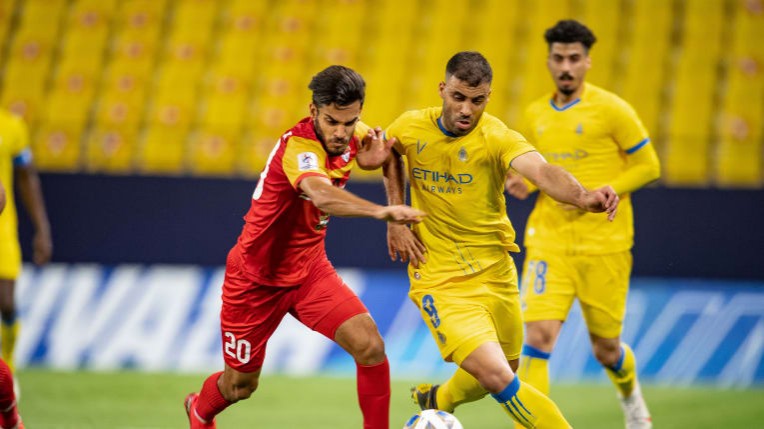 AFC - Saudi Arabia’s Al Nassr moved into pole position in the race to win Group D thanks to a 2-0 win over Islamic Republic of Iran's Foolad Khouzestan FC in the 2021 AFC Champions League on Friday.

Star striker Abderrazak Hamdallah set up Abdulfattah Asiri’s 54th minute opener before sealing the points with a late goal of his own as Mano Manezes’ side climbed to eight points from four matches, one clear of Al Sadd SC, who beat Al Wehdat across town in Friday's other Group D clash.

Three days on from their 1-1 draw on Matchday Three, the two sides reconvened knowing top spot in the group awaited the winners, but neither managed to take hold of a somewhat disjointed first-half, which produced little in the way of goalmouth action.

Promising moves at both ends of the pitch fell victim to the assistant referee’s flag before Mohamad Miri timed his run well enough to have the game’s first big chance, but the Foolad midfielder couldn’t make the solid contact required to beat Waleed Ali following a set piece at the half-hour mark.

The first-half stalemate wasn’t solely down to a lack of inspiration. Both sides handled themselves well defensively, with Foolad’s Mehran Mousravi and Aref Aghasi particularly impressive in keeping Hamdallh’s influence to a minimum.

The match, and Hamdallah’s role in it, turned sharply in the 54th minute, with the Moroccan forward playing an instrumental part in the construction of the opening goal.

The 2020 AFC Champions League Golden Boot winner played the roles of ball-winner and playmaker, leaping to intercept Mousavi’s pass out of defence before slipping the ball to Asiri, who drilled home an emphatic 12-yard effort with what was Al Nassar’s second shot of the match.

Foolad’s need for an equaliser was clear, but their window of opportunity continued to shrink without too many moments of concern for the group hosts, with the excellent Ali stopping whatever did come his way in the Al Nassr goal.

Fittingly, it would be Hamdallah who had the final say, making the points safe with a superb goal five minutes from time; cutting inside Mohammad Ghaseminejad and poking the ball through Moussa Coulibaly’s legs before delightfully chipping goalkeeper Mohsen Foroozan in what was by far the game’s standout moment.

The win means Al Nassr could theoretically have the group won by the end of Monday’s match against Al Wehdat of Jordan, but wrapping the section up that quickly will depend on the outcome of Foolad’s crucial meeting with Al Sadd.