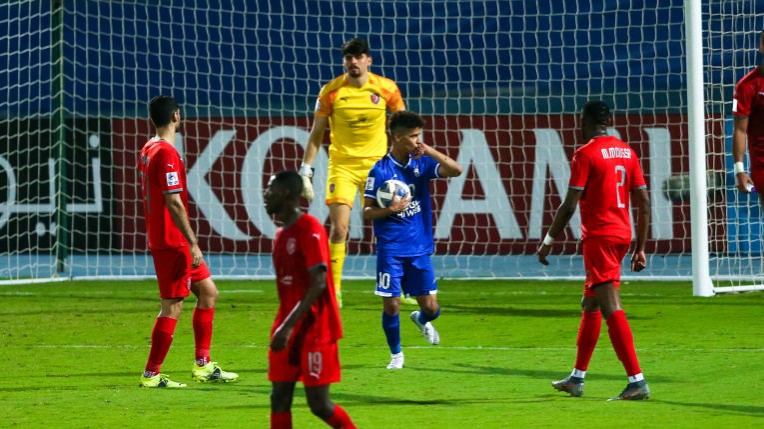 AFC - A brace from Kenyan forward Michael Olunga was cancelled out by goals from Cheick Diabate and Mehdi Ghaedi as Esteghlal FC and Al Duhail SC played out a 2-2 draw on Matchday Four of the 2021 AFC Champions League Group C on Saturday.

The result means Qatar's Al Duhail remain unbeaten in four games, topping Group C with eight points, while Esteghlal of the Islamic Republic of Iran continue to chase with seven points to their name, level with Al Ahli Saudi FC.

Three days after serving an entertaining seven-goal affair that saw Al Duhail emerge 4-3 winners in the corresponding fixture, the two sides locked horns again and there were goals in abundance once more.

Esteghlal were first to threaten as Ghaedi tested the goalkeeper from a narrow angle within two minutes and Al Duhail responded through Olunga’s powerful header from Edmilson’s out-swinging corner that was saved by goalkeeper Mohammad Rashid Mazaheri.

The Iranian side suffered a blow as left-back Mohammad Naderi, with two goals to his name in the competition already, was stretchered off to be replaced by Hrvoje Milic in the 24th minute.

The smile was soon back on the faces of coach Farhad Majidi’s men as they were awarded a penalty after their former player Ali Karimi brought down Farshid Esmaeili inside the box and Malian forward Diabate converted from the spot, putting the Iranians in front with his fourth goal of the campaign.

Seconds before the referee blew his whistle for half-time, Al Duhail won a penalty after Esteghlal captain Vorya Ghafouri handled Edmilson’s cross inside his own box. Olunga stepped up and powered in from the spot for his fifth goal of the 2021 AFC Champions League.

Olunga continued his fine scoring form in the second half, finding space at the far post to rise unopposed and head Edmilson’s cross from the free-kick into the back of the net just before the hour mark, moving clear of Omar Al Soma at the top of the competition’s scoring charts with six goals.

Esteghlal’s response was almost instant as Ghafouri dribbled down the right flank and sent a pinpoint low cross for Mehdi Ghaedi who swept home his third goal of the campaign to bring the Iranian side level, setting the stage for an exciting Matchday Five on Tuesday.