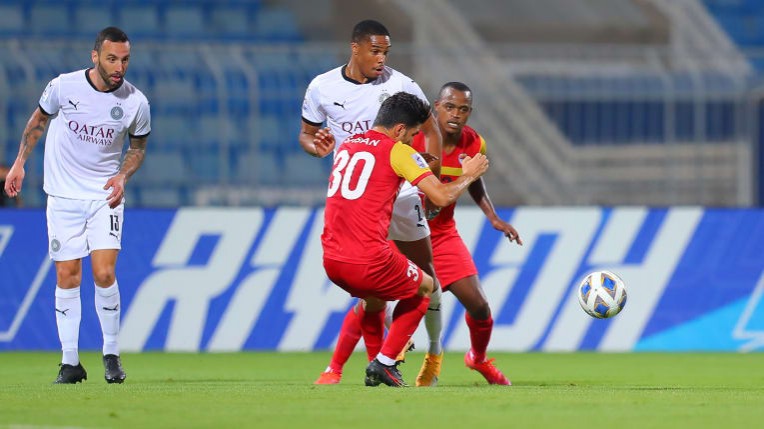 AFC - Al Sadd SC placed themselves in pole position in Group D of the 2021 AFC Champions League with a 1-0 win over Foolad Khouzestan FC on Monday.

The result, coupled with Jordan's Al Wehdat's stunning win over Al Nassr of Saudi Arabia in the other Group D match, means the Qataris lead the standings with 10 points going into the final matchday against Al Nassr, who are second on eight points.

Foolad's hunt for top spot, however, came to an end although the Islamic Republic of Iran side can still advance if they finish among the three best second-placed teams.

Al Sadd, who came into the tie having defeated Al Wehdat in back-to-back matches, started brightly, dominating possession in the opening minutes but Foolad goalkeeper Mohsen Foroozan was on form, cutting out the Qatari passes and crosses into the box with ease.

Foolad, needing all three points to stand a chance of a first place finish, matched the Al Sadd's aggression but couldn’t get their shots on target with Sasan Ansari rattling the side netting in the 26th minute, before Zobeir Niknafs missed with his shot after a perfect set-up by Ayanda Patosi seven minutes later.

For Al Sadd, the first half was a story of missed opportunities, especially so for Baghdad Bounedjah who was always a step too late, as the Algerian failed to connect to any of the crosses into the area..

The stalemate continued well into the second half, with Al Sadd holding the lion’s share of possession and the Foolad defence finally began showing signs of cracking as Mohammed Waad found space between the backline but his shot lacked the firepower to challenge Foroozan.

Al Sadd should have opened the scoring at the hour-mark as the Foolad goalmouth was left wide open after Foroozan failed to hold onto the ball, but Bounedjah’s strike was safely swept away by defender Moussa Coulibaly.

The Korea Republic player then almost turned provider in the 69th minute when Mohammed Jadoua headed in his cross but to Al Sadd’s dismay, the effort was ruled out for offside.

An exchange of passes between Chimba and Patosi gave Foolad a chance to equalise in the 81st minute but goalkeeper Meshaal Barsham was perfectly placed to deny Patosi as Al Sadd clinched a crucial win.