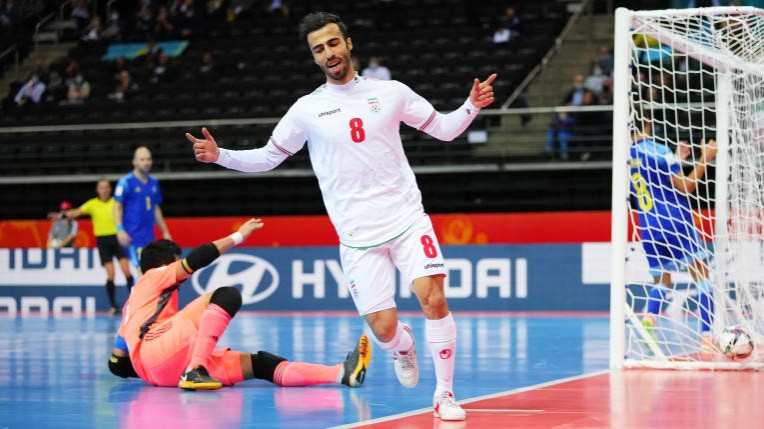 AFC - Islamic Republic of Iran's FIFA Futsal World Cup Lithuania 2021 campaign came to an end following a 3-2 defeat to Kazakhstan in their quarter-final on Monday.

Kazakhstan fought back from two goals down to advance to the semi-finals as Iran's bid to better their third-placed finish of five years ago was halted at the Kaunas Arena.

Iran dominated possession in the opening minutes but were unable to find any openings against a defensive minded Kazakhstan side looking to hit on counter-attacks.

Team Melli’s persistence, however, eventually saw them open the scoring in the eighth minute through Moslem Oladghobad, who finished Saeid Ahmad Abbasi’s pass into the area.

Kazakhstan, making their first-ever appearance in the quarter-finals after emphatically beating Thailand 7-0, regrouped and began pressing the 12-time Asian champions.

Iran, however, were unfazed and Ahmad Esmaeilpour displayed individual brilliance in the 15th minute when he collected Mahdi Javid’s long-range cross before dribbling past Kazakhstan goalkeeper Leo Higuita to make it 2-0.

Iran survived a scare seconds before the end of the first half when the Video Assistant Referee was called into action for Farhad Tavakoli’s tackle on Taynan in the box, but the referee deemed it a fair challenge as the Central Asians took their two-goal lead into the break.

Kazakhstan came out fighting in the second half and came close in the 23rd minute through Douglas Junior’s cracking strike from distance, but Iran goalkeeper Alireza Samimi pulled off an impressive save to deny the Brazilian-born winger.

Samimi, however, was unable to keep out Dauren Tursagulov’s strike two minutes later with the Iranian defence caught off guard by Junior’s quick through pass.

Buoyed by the goal, Kazakhstan pressed forward and drew level in the 29th minute through Arnold Knaub, who scored off a free-kick which was awarded after Mohammad Shajari’s foul on Higuita.

Taynan then completed Kazakhstan’s amazing comeback when he scored off a corner as Iran’s hopes of making a third semi-final were dashed.