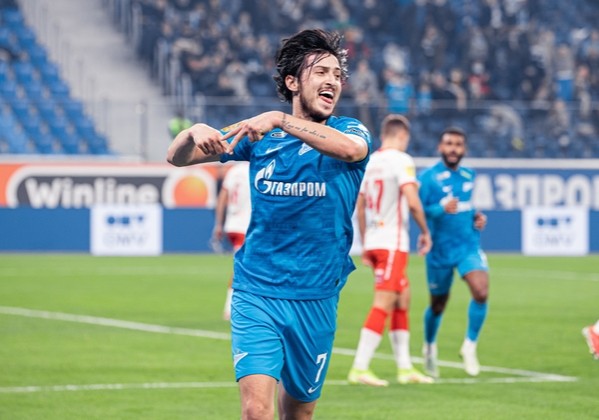 Remonews - In the match of the 12th round of the Russian Premier League of the 2021/2022 season, Zenit St. Petersburg met Spartak Moscow. The match took place at the Gazprom Arena stadium in St. Petersburg and ended in a landslide victory for the hosts with the score of 7: 1

At 20 ‘Zenit opens the scoring. The author of the debut goal was the Iranian striker of the biancoazzurri Serdar Azmun… At 28 ‘Zenit doubles in the standings. The Brazilian winger scored Claudinho, who sent the ball into the far corner of Maksimenko’s goal with a beautiful dribble shot. At 36 ‘Zenit took the lead to a devastating advantage. The author of the third goal in the match was Serdar Azmun, who scored twice.

In the 79th minute Zenit scored their sixth goal. The goal was scored by the substitute striker Artyom Dzyubawho converted the sentence. By the way, at the moment when the penalty was awarded, the Spartak defender was removed from the field. Maximiliano Kofriewho received the second yellow card. At 88 ‘Zenit scored the seventh goal with attempts by the substitute Alessandra Erochin. The referee’s final whistle marked a devastating victory for the team Sergei Semaki.

Zenit after 12 rounds of the RPL is the leader of the Russian championship. Sergey Semak’s team scored 26 points in 12 rounds. Spartak have scored 17 points in 12 games. The departments of Rui Vitoria are on the seventh line in the standings.