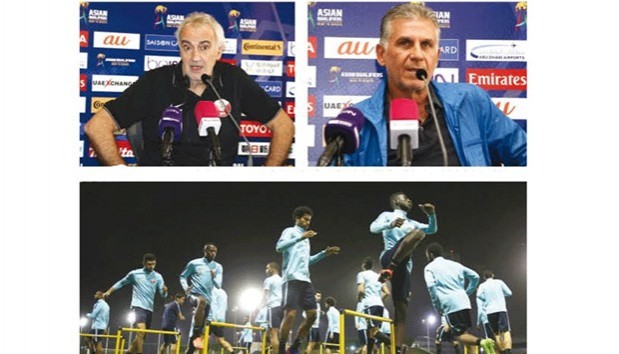 The result means Qatar, the host of football’s biggest tournament in 2022, are bottom of Group A with just four points from six games.

With four matches to play, Qatar are 10 points behind leaders Iran and six points adrift of South Korea who occupy the top two spots which guarantee automatic qualification to Russia in 2018.

Even their hopes of finishing third, where Uzbekistan sit with nine points, and where they would progress to a last chance play-off now seem remote.

They are even four points back from Syria, a nomadic team, without key players, who have to play their “home” matches in Malaysia due to the ongoing civil war.

“I had big expectations for today’s result, really I am very sad,” said a forlorn Qatar coach Jorge Fossati after watching his team lose to a Mehdi Taremi goal.

The sense of disappointment was clear as fans filed from the Jassim bin Hamad Stadium in Doha.

That tournament represents the last chance for Qatar to qualify for a World Cup before automatically playing as hosts in 2022.

Qualification, still mathematically possible, would have shown doubters that Qatar is a genuine football nation.

The flipside is that now their almost certain failure to qualify means Qatar is open to several more years of inevitable sneering that their place among football’s elite come 2022 was secured only by the country’s incredible wealth.

Just last month, it was revealed that Qatar is spending almost $500 million every week on major infrastructure projects for 2022.

Just how serious their ambitions were for next year’s tournament was reinforced by their dramatic decision to draft in current coach Fossati after a poor start to the latest round of qualifications.

There have been pluses with the discovery of young local star Akram Afif, a forward who this season became the first Qatari to play in La Liga with Sporting Gijon.

The match on Thursday was also marred by bitter feuding between the coaches. An angry Iran coach Carlos Queiroz accused Qatar’s coaching staff of verbally abusing his mother.

The coach said members of the Qatar bench made rude remarks in Spanish about his mother and accused his opponents of “a lack of ethics” throughout the match.

“Two staff insulted me in Spanish, I can’t understand it,” he said.

Asked to clarify, he said they had made offensive remarks about his mother.

“People don’t have the right to spend the game insulting and offending other people,” said Queiroz.

“I have never seen this in my life before,” said the former Real Madrid coach.

He said Qatar’s antics were “embarrassing”.

Queiroz also accused the opposite bench of trying to influence the referee throughout the game, which saw Iran take a giant step towards qualification for the World Cup in Russia next year while Qatar’s hopes virtually vanished.

The two benches clashed at the end of the match, confronting each other and Queiroz was booed from the pitch by home fans.

That bad-tempered ending came after tensions had simmered between the coaching staff prior to the crucial qualifier.

Before the match, Qatar’s coach Jorge Fossati said he was upset by remarks attributed to Queiroz about the number of foreign-born players in the squad.

The remarks were allegedly made when the teams met in Tehran last September when Iran secured a 2-0 victory with goals in the 94th and 96th minutes.

That match too ended with angry clashes after the final whistle between players and officials.

Queiroz however denied making the remarks.

In response to the accusations of abuse, Fossati said he did not believe Queiroz and accused the Portuguese coach of being a “Hollywood artist”.

Talking about the remarks over naturalised players, he said Queiroz had accused the media of being “liars”.

“If he doesn’t take responsibility for what he said (about naturalised players), how can we believe what he says?”

He added that Queiroz had not raised the issue when the pair had met immediately after the final whistle.

“He is not the kind of man that I like,” added Fossati.