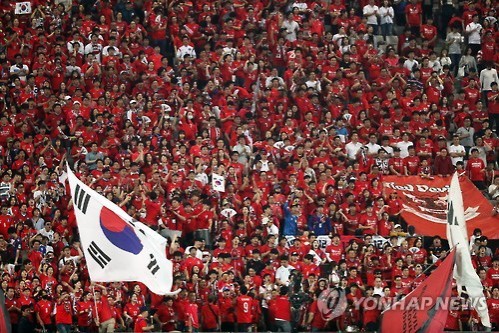 The Korea Football Association (KFA) said some 54,000 tickets were sold as of 3 p.m. Tuesday for South Korea's showdown against Iran at Seoul World Cup Stadium in Seoul on Thursday. This is the second-fastest pace for a national team match since October 2013, when 58,000 tickets were sold two days before South Korea's clash against Brazil in a friendly match. The South Korea-Brazil match eventually drew more than 65,000.

Tickets for this World Cup qualifying match began on Aug. 10. The KFA previously said it aimed to draw more than 60,000 fans to the 66,704-capacity Seoul World Cup Stadium, so that South Korean players can feed off the energy from fans.

"The first two days and last two days of ticket sales account for 35 percent of total sales," a marketing official at the KFA said. "By looking at the sales trend, we're certain to see more than 60,000 people at the stadium."

Seoul World Cup Stadium has attracted 60,000 or more spectators on 20 occasions, according to the KFA. Its largest attendance came at the 2002 FIFA World Cup semifinal between South Korea and Germany, with 65,625 fans packing the stadium. The last time the national team saw at least 60,000 at Seoul World Cup Stadium was the friendly against Brazil four years ago.

Meanwhile, the KFA said Australian referee Peter Green has been assigned to the match. He previously officiated South Korea's World Cup qualifier against China in March.

The match between South Korea and Iran will start at 9 p.m. Thursday. Both teams are in Group A in the final Asian qualifying round for the 2018 FIFA World Cup.