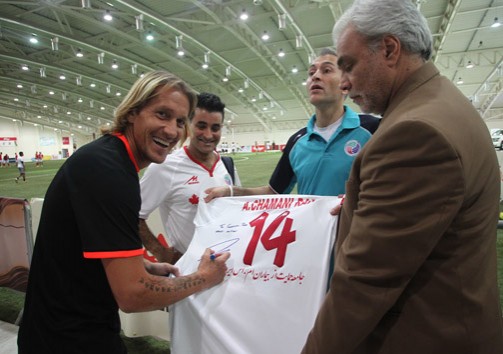 Spain are pitted against Iran, Morocco and Portugal in Group B of the 2018 World Cup.

La Roja will meet Iran in Kazan on June 20.

"Spain have been drawn in a difficult group and I can explain it to you. We will play the first game against Portugal, so the loser will have a lot of pressure for the next two matches. And Iran and Morocco are not the easy opponents to beat,” Salgado said in an interview with Noticanarias.

“Spain will face Iran in the second match. Iran are a very tricky opponents and take advantage of a coach that we know very well. Carlos Queiroz has done a great job with his team. They have qualified for the 2018 World Cup in a big way,” the former Real Madrid defender added.

“And Morocco have sealed their ticket without conceding a single goal in the third phase of the qualifiers. So they will be another great rivals to beat.

“As I said, the first game against Portugal will be very important. The Portuguese are the current European champions. However, if we look at the individuals, I think Spain are a better team than Portugal. I see the Spanish team will advance to the next stages and fight to win the World Cup,” Salgado concluded.

Iran will beat Marakesh  and will either beat Espania or Portagal to Advance to next Run.