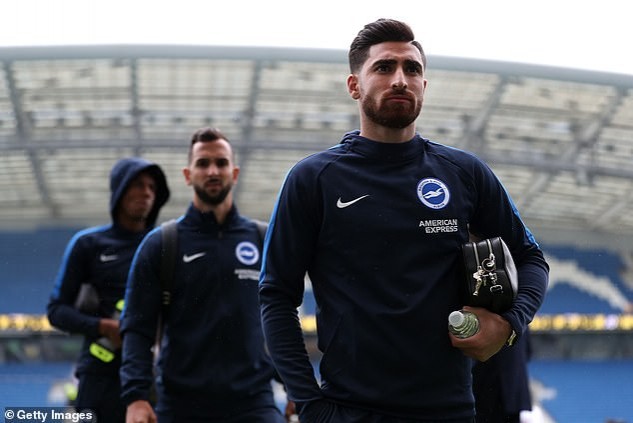 To anyone who’s had the pleasure – or should that be pain – of watching him regularly this season, he has looked like a bloke who’s won a cornflake competition to spend a year as a Premier League footballer.

The only thing of note he has done since arriving at the Amex, other than add loads of followers to the club’s Instagram feed, is to hit the bar against Southampton at home.

£17m for one shot that rattled the woodwork. That’s on a par with the sort of value for money you get when buy a totally unnecessary pint with a Buddies Buster at 3am in the morning after a night on West Street.

But have we got it all wrong about Jahanbakhsh? Has he looked like a cornflake competition winner because he has been woefully misused by Chris Hughton?

Jahanbakhsh’s Iranian supporters certainly seem to think so. One Twitter account, Persian Futbol, has gone so far as to publish the ‘evidence’ which it claims proves it.

They recently posted two heat maps which show where Jahanbakhsh spent the majority of games positioned in his first season in an Albion shirt compared to where in his final season with AZ Alkmaar when he scored 22 times to be the Eredivisie’s leading scorer and claimed 14 assists.

This comparison shows us several things. The first is that Jahanbakhsh is very clearly a right winger. Both Albion supporters and Iranian fans have been banging the drum of him looking so poor because he needs to play through the middle, either as a striker or a number 10.

The heat map disproves that theory. Jahanbakhsh very clearly excelled in the Netherlands when he was played out on the right or occasionally by coming inside in an area around the edge of the opposition penalty box. He very rarely entered the defensive third of the pitch for Alkmaar.

That’s in stark contrast with his Albion heat map. Jahanbakhsh seems to have spent quite a bit of his time inside his own half, which will hardly come as a surprise given Hughton’s conservative approach, especially away from home.

The theory goes that he is being wasted by being asked to do such a defensive job. With more freedom to attack, we’ll see more out of Jahanbakhsh apparently. That might be true, but if the formation and tactics under Hughton were so restrictive, then how comes March and Knockaert didn’t have the same issues?

Both of their heat maps show that not only did they spend as much time defending as Jahanbakhsh, but they were also able to get forward and support in attack as well. That resulted in four goals and seven assists for Knockaert and one goal and six assists for March. March’s numbers were particularly impressive given that his heat map suggests he was equally effective down either flank.

A player signed on a free from Lewes has contributed to seven more goals than a £17m record buy playing under the same conditions and instructions. Whilst a more defensive role than Jahanbakhsh is used to might not have helped his cause, those laying the blame solely at the tactics of Hughton are barking up the wrong tree.

Scoring goals and claiming assists in a weak Dutch League for a side fighting at the top of the table is clearly a very different ask to playing in the toughest league in the world. Just ask Ricky van Wolfswinkel, Vincent Janssen, Memphis Depay or, er, Jurgen Locadia how difficult it is to go from being a goal machine in the Eredivisie to doing it in the Premier League.

That’s what Jahanbakhsh is finding out. Possibly, one of the reasons his heat map doesn’t show him in attacking positions is because he can’t keep up with the frenetic pace of English football.

We saw that at Arsenal. Jahanbakhsh spent the first half ambling up and down the right wing in front of the away section at the Emirates. By the time he’d tracked back, the ball was often back up the field. By the time he’d got forward again, Arsenal were breaking and he had to come back again.

And again, just to illustrate how the system can’t be entirely to blame, it was Knockaert’s introduction for Jahanbakhsh which sparked a brilliant second half performance. Down the other flank, March won the penalty which Glenn Murray converted for the equaliser.


Jahanbakhsh’s inability to keep up may also explain why games seem to pass him by so much. A lot of the time, the frustration with Jahanbakhsh isn’t that he’s done something bad; it’s that he hasn’t done anything at all.

His inability or unwillingness to take a full back on doesn’t help. How much of Knockaert and March’s forward positioning on their heat maps are the result of being able to beat a man? They’re both brave and bold and whilst that may sometimes backfire when they lose the ball, it can also get them into more dangerous areas of the pitch.

Can you remember Jahanbakhsh ever beating a man? He’s all little flicks but it’s a struggle to recall many occasions when he’s skipped past an opponent to advance down the line. Normally, it’s a sideways pass or a loss of possession.

This is is clearly going to be a big summer for Jahanbakhsh. He’s had a year to adjust to the Premier League and will have a full pre season under his belt for 2019-20, unlike last year when he arrived late after the World Cup.

Graham Potter’s appointment will also shake things up. For those who do believe that it was Hughton’s fault Jahanbakhsh couldn’t manage a goal or assist all last season, the arrival of a more-attack minded manager who has a track record of getting the best out of under performing players might be what’s needed for Jahanbakhsh to finally show why he is the Albion’s most expensive player ever.

On the evidence so far, you’d have to say he just isn’t up to Premier League standard. If Potter can help to reverse that opinion, then we could well have a very good manager on our hands. And hopefully, a player worthy of the money paid.