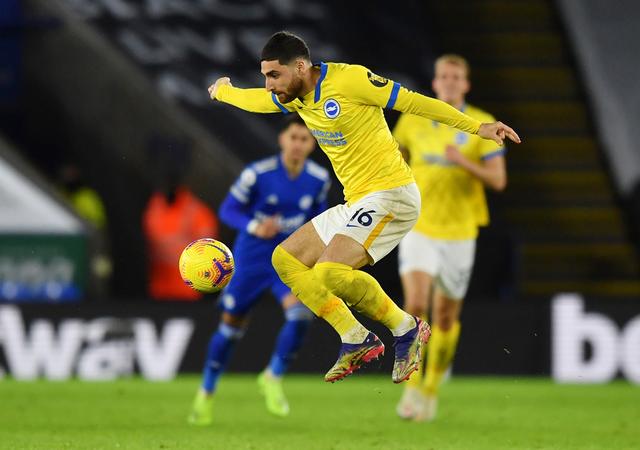 Jahanbakhsh made his first start of the Premier League season at the King Power Stadium last Sunday but was substituted after just 55 minutes as Brighton were blitzed in the first half by a clinical Leicester attack.

The Iranian international has struggled to force his way into the starting XI this campaign and has also been hindered by a niggling hamstring injury.

Jahanbakhsh began quite brightly at Leicester and forced Foxes keeper Kasper Schmeichel into an early save with a firm effort from outside the box after a good run and cross from Solly March.

The 27-year-old also played a nice through ball into Danny Welbeck when the scores were locked at 0-0. Once again Schmeichel was equal to the task and kept out Welbeck's effort with an outstretched left leg.

That proved to be as good as it would get for Jahanbakhsh and Brighton as Brendan Rodgers' team went on to dominate and move up to third in the table after a brace from James Maddison and a well-taken goal from Jamie Vardy.

Jahanbakhsh was replaced shortly after the interval by Steven Alzate and his chances of starting Brighton's crucial match at Fulham on Wednesday could be slim.

"I thought he started really well," said Albion head coach Graham Potter. "It was a nice ball into Danny for his chance.

"He can see the challenges he has had. He's had frustration with a couple of injuries that have stopped him really getting into the starting XI.

"He had one at the start of the season and then one not so long ago. You could see that in terms of his football.

"It is hard to go from not too much football and then into the Premier League. But as a first start I thought he started really well.

"It became difficult for him and the team, and the scoreline was what it was, but it is a start for him."

Potter offered a few words of consolation to his attacker on the touchline at the King Power as a clearly disappointed Jahanbakhsh trudged off early with his head bowed and his team 3-0 down.

"I told him he did well in a tough team situation," said Potter. "He started the game well, with some good attacking moments.

"I know he has been frustrated and that he has been fighting to try to get into the team. It was just that type of message really."

The game at Leicester was also a painful way for Potter to mark his 50th Premier League match in charge at Brighton.

Potter was brought in from Swansea in May last year after the club parted ways with previous boss Chris Hughton.

He steered Brighton to safety last season with a record points tally for Albion in the top flight and has also integrated youngster such as Steven Alzate, Aaron Connolly and Tariq Lamptey into the first team.

Defeat at Leicester however keeps Brighton in 16th place and they are in the thick of this season's developing relegation battle.

Potter described his first 50 matches as 'painful and enjoyable' and knows huge challenges await this season.

"It has been incredibly challenging," Potter said. "All the emotions you would expect. Lots of highs and lots of lows. I also consider myself very fortunate to do the job that I do and to have these challenges.

"But at the moment that is not being reflected in the points, which is something we have to change.

"That is where the work is at the moment. We have introduced some younger players and that has been good.

"At the same time it is a bit of a process that you go through with those types of guys. But overall I would say challenging has been the main word."

Stop with these BS riddles...Stop using your players as a scape goats..Truth is your boring pussy play back strategy doesnt work and every team in the league knows by pressing up front they can cripple you...For fuck sake quit as you are not good...

Stop with these BS riddles...Stop using your players as a scape goats..Truth is your boring pussy play back strategy doesnt work and every team in the league knows by pressing up front they can cripple you...For fuck sake quit as you are not good enough!