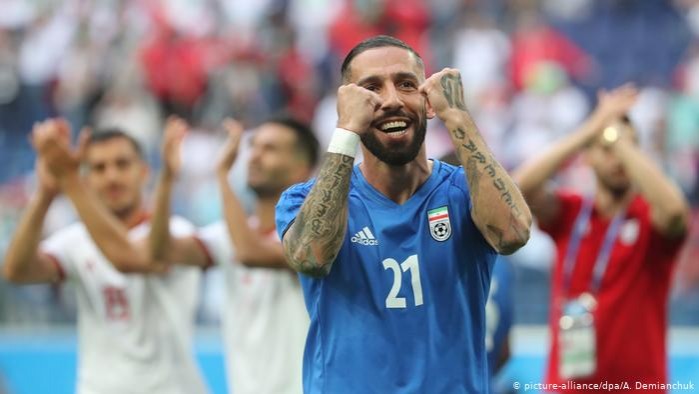 DW - A former Bundesliga player is in hot water in Iran because of photos on his Instagram account. They depict some of Ashkan Dejagah's tattoos and also his wife not wearing a headscarf.

German-Iranian footballer Ashkan Dejagah has been summoned to the Ethics Committee of Iran's Football Federation.

Dejagah, captain of the Iranian national team who just moved to play for Tractor Sazi Tabriz in Iran, is under pressure for showing his tattoos in public and because of photos of his wife on Instagram in which she is not wearing the hijab headscarf that's mandatory in Iran. In one of the photos, she is giving her husband a kiss on the cheek; in another, her forearms are exposed.

Posts by the popular footballer, recently voted in an online poll-Iran's best ever left midfielder, tend to reach a large audience. These were no exception. The ethics committee is demanding that Dejagah explain himself.

The 32-year-old has extensive sleeve tattoos on both arms, but had made some effort to hide them in his earlier appearances for Iran's national team. Players in Iran, many of whom have tattoos, regularly take steps to cover them up — wearing long sleeves whatever the weather or using body tape. 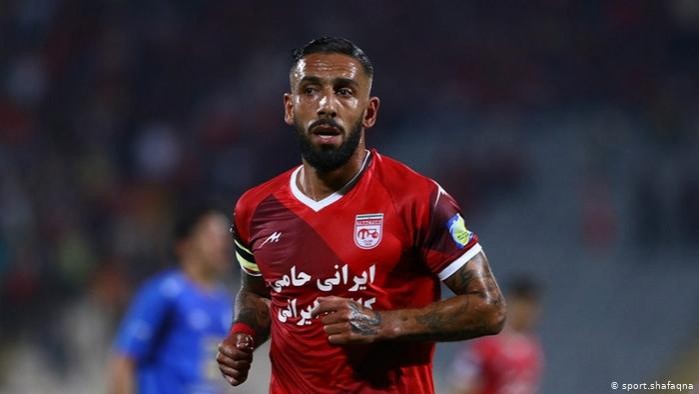 Dejagah posted one image clearly displaying his arms on Wednesday, writing an accompanying text in English. In it, he talks about an international journalist asking him if he had moved to the Iranian league "just for relaxing." Dejagah says how this hurts him personally, and shows a lack of respect for Iranian football, the league and the FA on the journalist's part.

"So what is now more disrespectful? That I'm playing just football where the people can see my tattoos?" he asks.

However, Dejagah goes on to say "one thing I learned from my parents in young age is to respect anybody and any rules and I will also do it now! ... And please let me now focus on my job, I'm only here to play football." He also posted a fresh set of photos of his wife, wishing her a happy birthday.

The footballer was raised in Germany after his family migrated while he was a young infant. He became European champion with the under-21 Germany team, but opted to play for Iran once it became clear a senior Germany call-up might never come.

Tattoos are extremely popular among footballers around the world at the moment, with a plethora of the game's top stars sporting a variety of designs, written messages and in some cases even pictures of their loved ones carved into their flesh.

The Ethics Committee of Iran's Football Federation issues repeated warnings to players, describing having a tattoo as unprofessional. Iranian authorities' sensitivity is heightened for footballers, because football is one of the most popular sports on Iranian TV — with a particularly high following among families.

'Symbols of Westernization' or works of art?

Iran considers athletes to be role models responsible for promoting "Islamic values" to the younger generation. Iranian state media often refers to tattoos as a symbol of "Westernization" or part of a Western "cultural invasion" of Islamic society.

Civil servants in Iran have also been banned from getting tattoos; if they already have them, they are encouraged to hide them while at work.

The practice is being discouraged by some conservative families but opinion is by no means unanimous. Many Iranians, especially younger ones, consider it their right to do as they will with their bodies. Some also call tattoos fashionable; others argue they can be works of art. 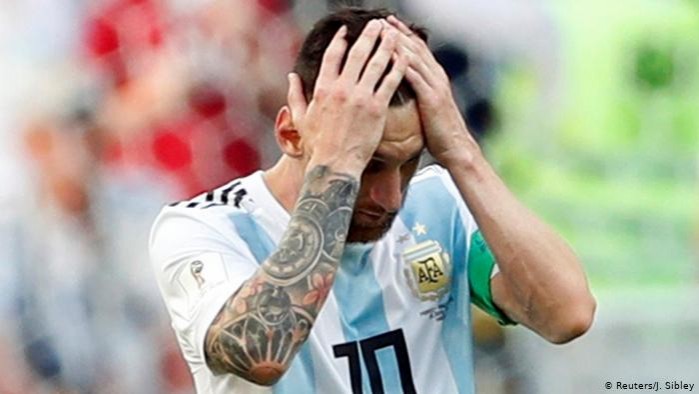 From larger cities in Iran, reports have emerged of the country's "moral police" (an arm of the police force interested only in crimes against Islamic norms, such as failing to wear a headscarf) stopping and questioning people with visible tattoos.

Are tattoos illegal in Iran?

"There is no rule of law against getting tattoos in Iran," said Mohammad Nasl, an Iranian criminologist to the Iranian Newspaper Shahrvand. However, while there's no explicit law about tattoos, he acknowledged that other laws were open to interpretation and could be deemed to include tattoos.

One state media outlet with close ties to Iran's judiciary, Mizan News Agency, wrote a recent article claiming that getting a tattoo was considered an "immoral act and inappropriate in Iranian society," albeit adding that "it is not subjected to any punishment and crime in the book of laws."

Despite this fact, Dejagah will soon have to answer for his ink — and perhaps even his wife's attire or her kissing him on the cheek — with the national football federation. Many Iranians have expressed support for him, saying he's facing rebuke for "his private matters."

They are all arabs

The government in iran is acting like the Saudis. Arab is Arab.

It was a bad move from him to move from German league and English to Iranian league.Now he has to deal with bunch of MULLAH.