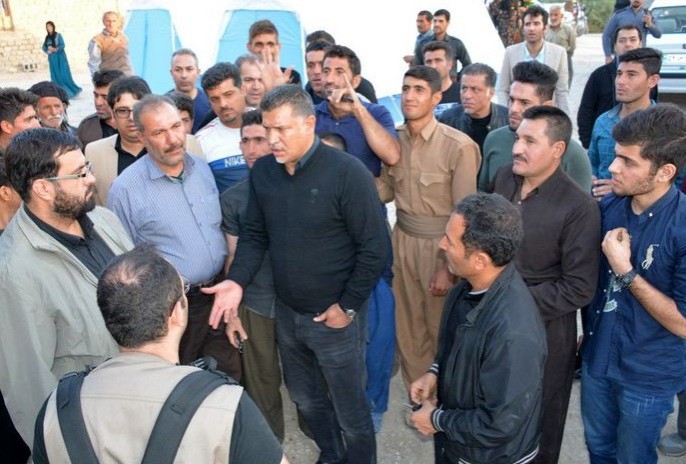 Al-Monitor - "People will be the supreme judges," wrote Ali Daei at the end of a lengthy post on his Instagram page, which is followed by some 3.6 million people. The strongly worded critical post came after the legendary former soccer player and current coach was summoned by the Iranian judiciary for "explanations" regarding public donations wired to his account for the quake-stricken residents of the western town of Sarpol-e Zahab. The donated deposits in Daei's bank account have now been frozen.

Sarpol was hit hardest by the magnitude 7.3 earthquake that rattled Iran's west and parts of eastern Iraq on Nov. 12, 2017. The quake killed over 600 people and left entire rows of villages nearly in total rubble. Daei, the 2001 UNICEF Goodwill Ambassador, rushed to the quake-stricken areas and has been leading reconstruction projects there ever since. He even declined a 2018 Russia World Cup invitation, citing his preference to focus on the people in the devastated areas.

Now, after being summoned, the former Bayern Munich striker struck back at "the authorities who have only disrupted" his reconstruction projects instead of helping him with better service to citizens hit hardest by the earthquake. The post alongside a copy of the order triggered an outpour of solidarity among Daei's followers, mainly telling him that the public is aware of his transparency and appreciates his genuine hard work.

A top criminal investigation officer appeared on state television explaining the decision, saying, "We need to know the amount of the donations and where they are being spent." The officer added that those summoned have not been treated as suspects or convicts.

But that did little to console the soccer star. "They are annoyed by the fact that people trusted me," Daei said in an interview published by the Reformist Aftab News while stressing that he has been fully accountable for people's donations. Daei, one of the world's all-time leading goal scorers in men's international matches, vowed to double his efforts for the quake-stricken people once his accounts are unfrozen.

Daei launched his campaign immediately after the quake rocked the area. According to his report, the donations now stand at around 110.123 billion rials ($2.64 million). His campaign also collected massive non-cash contributions, including 21 pallets of goods meant for kids in one cargo alone that were donated by his fans from outside the country.

Also summoned last week over the same issue was Sadegh Zibakalam, a university professor and political scientist known for his biting criticism of the Islamic Republic's foreign policy. Zibakalam wrote on his Twitter account that the decision to "freeze public donations" was a violation of the law. The funds he raised have already topped 38 billion rials ($902,000).

The conservative daily newspaper Sobh-e No was not very supportive of the Reform-minded professor. It cast doubt on his handling of the donations and criticized him for his slow relief response. But the political scientist insists that his major plan was not to erect tents or temporary metal structures; rather, his goal was a long-term project aimed at building what he called the Village of Hope.

In the wake of the 2017 quake, many Iranians heeded calls for donations by public figures and celebrities. Cash flowed directly to those accounts, particularly after reports on the ground about inadequate government supplies and mistrust in the official channel for relief work.

"I always wanted my people to like me not for the goals that I score, but rather for my personality," Daei said in an excerpt from an old video interview that has gone viral on Iranian social media. The file was published by the soccer icon on his social media account embedded with another clip showing phased reconstruction projects. In the same post, he expresses gratitude to all those who are "standing by" him while the big tasks are being accomplished.

It is a shame, MULLAHS with a deep Pocket they thing everybody has a deep pocket. Khamenei and his gang they are stealing and brutalizing Iranian people.