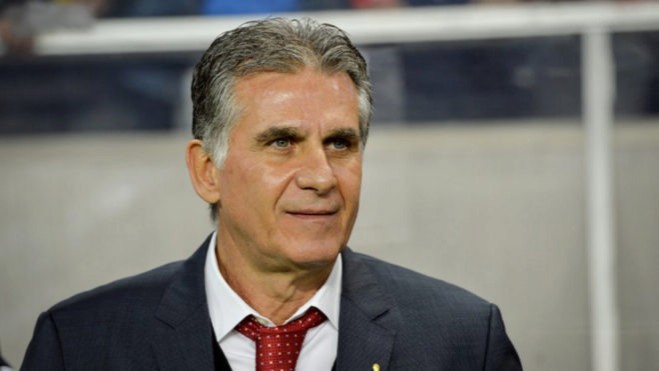 Reuters - Carlos Queiroz says he will not allow “external factors” to influence his decisions as Iran head coach and maintains that Masoud Shojaei was let out of his squad to face South Korea on Thursday for football reasons.

Iran, who have already qualified for next year’s World Cup finals, travelled to Seoul without veteran midfielder Shojaei, who, along with compatriot Ehsan Hajsafi, featured for Greek club Panionios against Israel’s Maccabi Tel Aviv in a Europa League playoff on Aug. 4.

The Iranian government does not recognize the state of Israel, and athletes from the country who compete against their Israeli counterparts have been banned in the past from representing Iran.

The move prompted FIFA to ask Iran’s FA to provide further information on the situation. FIFA’s statutes ban political interference in its affiliated national associations, which can be suspended if the rule is breached.

If a country’s FA is suspended, it means both the national team and its clubs are barred from international competition.

However, with Hajsafi named among the 23-man squad to take on the Koreans at Seoul World Cup Stadium, Queiroz said Shojaei had been excluded for purely sporting reasons, though he did not elaborate on them.

“Imagine if Carlos Queiroz starts to explain why Masoud Shojaei is not here,” he told Reuters.

”The turbulence stays outside, whether the issues are political or religious or social or economic,“ Queiroz said. ”They stay outside.

”I am a man of the football entertainment industry. My answer is to win the game. Don’t expect from me political answers, religious answers, racist answers because what counts for me is the game that my father taught me.

“He was a coach and a player and he always told me: Never lie to the game.”

Queiroz has become a hugely popular figure in Iran during a successful spell in charge that has seen him guide the country to back-to-back appearances at the World Cup for the first time in the nation’s history.

Iran appeared at the finals in Brazil in 2014, when they were eliminated at the end of the group stage, and have already secured their place in next year’s finals despite having two qualifiers remaining.

"My duty is to bring joy and happiness to the people," he said.