As expected from the title holders, Iran showed their prowess from the first blow of the whistle with Fatemeh Etedadi finding the back of the net just seven seconds into the game, courtesy of Fareshteh Karimi's pass into the box.

After conceding the early goal, Turkmenistan tried to play a more compact game, tightening their defences as Iran had free reign of the ball.

Kamil Mingazov's side showed moments of brilliance, pushing the Asian champions back into their half, but Iran eventually doubled their lead when Turkmenistan goalkeeper Malika Eminova blocked Fareshteh Khosravi's shot but the ball fell right in front of Fahimeh Zarei for a simple finish, before scoring her second of the night moments after the restart.

Karimi etched her name on the scoresheet in the eighth minute, before Etedadi earned her second 12 minutes into the game from a set-piece, shooting into the top left goal. 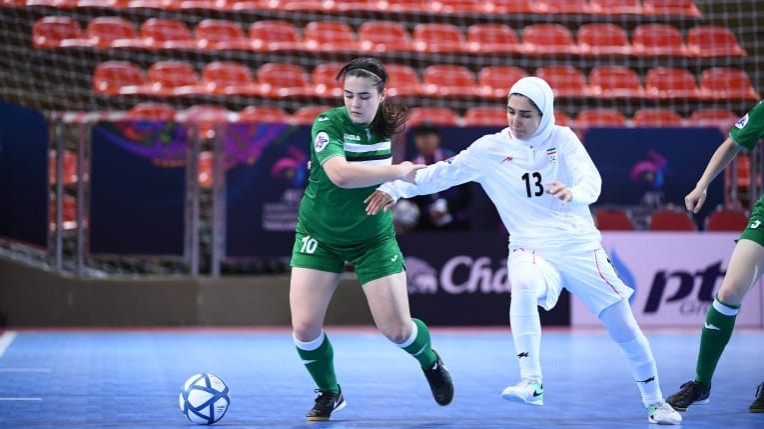 After four fouls, Bangladesh were more hesitant in their movement, which Iran exploited and Fatemah Papi made it 6-0 in the 16th minute, while Karimi increased her personal tally to two goals within the same minute.

Iran showed that they weren't just deadly in their set-pieces, as every player had the ability to score from distance and Seyedehnastaran Moghimidarz unleashed a crackling strike two minutes from the half-time whistle to give Iran an eight-goal lead going into the break.

Karimi completed her hat-trick three minutes into the restart, and Arezoo Sadaghianizadeh pushed the scoreline to 10 when she intercepted a pass forward and her left-footed strike gave no time for Eminova to react.

The tournament debutants, however, continued working hard in defence but Sara Shirbeigi scored again for Iran in the 32nd minute, after a quick one-two between her and Papi in the final third.

Etedadi scored in the 35th and 38th minutes, before Zarei ended proceedings in the final minute of the game to power Iran to a 14-0 win.

“Iran are the defending champions, and it’s really hard to play against them. Their quality is much higher than us and our team is quite young and has only been around for one or two years. We didn’t have international friendly games before this so it is quite hard, but hopefully in the next game we will improve.”