Frontrowsoccer - Dan Gaspar has forged an impressive coaching resume as an assistant and/or goalkeeping coach for club and country.

He has directed or helped guide teams at all levels.

As an assistant and goalkeeping coach of Portugal and Iran, the South Glastonbury, Conn. native has been involved in three World Cups – 2002, 2010 and 2014.  He also was a technical goalkeeping consultant with South Africa.

He also has had experience at the club level at home – NY/NJ MetroStars (now the Red Bulls in Major League Soccer), Connecticut Wolves (United Soccer League) – and overseas with Nagoya Grampus (Japan) and Sporting CP, Benfica and F.C. Porto (all Portugal).

And that’s not to forget the college game as an associate coach at Central Connecticut State University and as head coach at the University of Hartford.

And for good measure, Gaspar has coached youth soccer at the Under-16 and U-18 levels in Portugal.

Most recently, the 62-year-old Gaspar was Iran’s goalkeeping coach for six years before returning home to the United States prior to the World Cup to pursue other challenges.

Why did you decide to leave Iran?

The Iran Federation and I have a difference of opinions and interpretation of the facts. I’m not at liberty to discuss the details in a public forum. At this time, I have no further comments.

Unfortunately, there is a difference of opinion between the Iran Federation and me and my lawyer is taking care of the situation.

What will you miss the most?

The amazing fans who filled the stadium with incredible spirit and pageantry. As well as the players who despite all the challenges displayed fantastic courage. Their love for the game and their pride for the people were impressive and motivating. Their will to fight and compete was unstoppable. They were on a mission every time they stepped onto the field and they delivered amazing results. I have no doubt this team will do the same when they participate in the 2018 Russia World Cup. I would not be ta bit surprised that this team will produce a major upset. 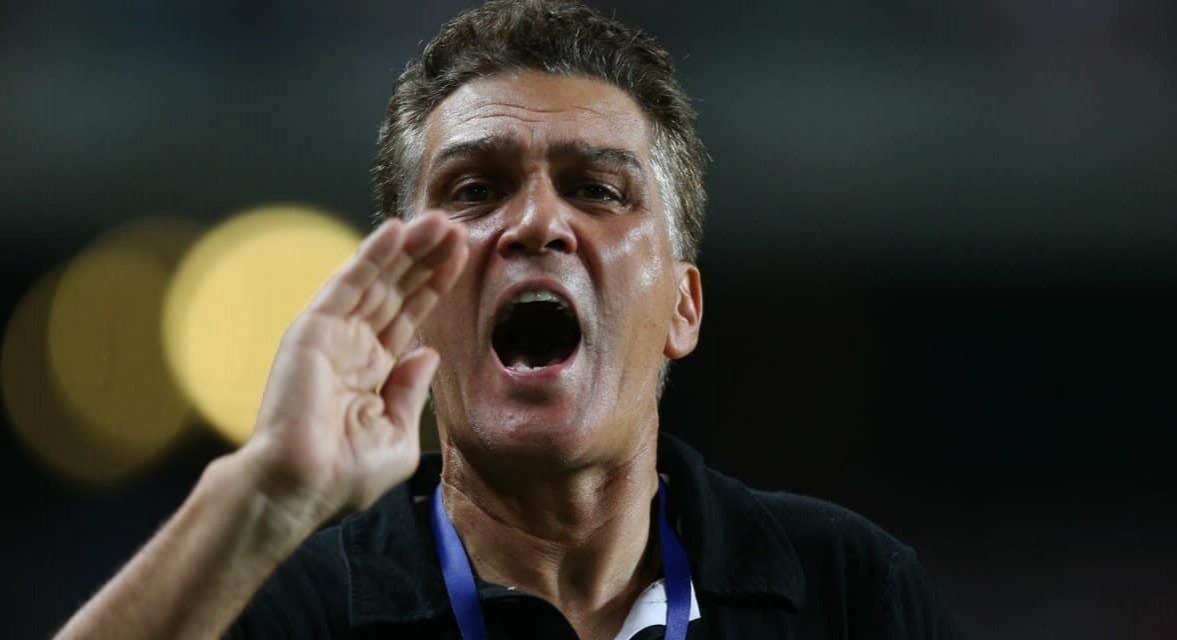 What was your most memorable moment with the Iranian national team?

A few most memorable moments.

Despite all the odds Iran National Team managed to be victorious versus South Korea in Ulsan to qualify for the 2014 Brazil World Cup. The hysteria and joy during our celebrations on the pitch, in the locker room and on the team bus was magical. I had purchased a replica World Cup Trophy. It was one of our symbols of strength and unity. It was wonderful to see the players and staffs run and jump around the field holding that trophy with pride. The Azadi Stadium reception when we landed in Tehran with our delegation was incredibly filled with emotions.

Iran national team players and staff visited the Imam Reza Orphanage. The joy of them being with their heroes was humbling. The interaction and engagement was real. Often times we showed our players a movie clip of our visit before our crucial games. This reminded us of our commitment and promise we made to the Orphans; we would dedicate our 2014 Brazil World Cup qualification in their honor and we all would donate our bonus to their house of orphans. We kept our word.

The football world would never forget when Iran played against Argentina in the 2014 Brazil World Cup. It took four-time FIFA World Player of the Year Lionel Messi to score a brilliant goal in extra time to give Argentina a 1 – 0 victory over Iran to avoid an historical major upset. Number 10 broke our hearts

Do you have a least memorable moment?

My worst moment ironically was when I took my first flight to Tehran. I had resigned from my position as head coach of the University of Harford to take on my new chapter in my professional career.  I had organized and managed my life in preparation to take on this unique journey. The staff (Carlos Queiroz, Antonio Simoes and myself) had met in Lisbon airport in Portugal and we all departed together to Tehran. When we arrived I was held back at the airport by security and separated from the other staff members. I was held for hours in a small office with no windows, a single chair and isolated from the public. Security spoke no English. I had no clue what was going on. Until a few hours later someone visited me and explained to me in English that my visa had not been processed correctly and I could not enter country. Our press conference was scheduled for the next day announcing us as the new technical staff for the Iran National Team. Instead, that evening security put me on flight to Germany. I thought my life was over. I began to think about all the reasons that experts and family members shared with me to encourage me to decline this invitation. I felt at that moment maybe they were right.  I checked into a hotel at the Frankfurt Airport. At the time, I did not have an international cell phone and my luggage remained in Tehran.  With no spare cloths or working cell phone I was forced to remain in my room. I needed to be available to communicate with the Iran federation liaison and technical staff to keep me updated on my situation. It was difficult to read the Iran Federation Press Conference release announcing the new Iran national team technical staff and photos of them signing their contracts and I was not present. It was a nightmare. What was I going to do now? My brain was spinning. Could not go back to the University of Hartford after my resignation. After 4 days in Frankfurt, the Iran Federation managed to convince and obtain special approval from highest level of security to allow me into Iran. What a relief!

What were the atmosphere of soccer games in Iran like?

Azadi Stadium is an inferno for any visiting team. It’s intense and intimating. Few teams have ever left the Azadi Stadium with three points. A wave of green, white and red colors dominates the arena. It’s normal to have 120 thousand cheering and jubilant male fans attend the Iran National Team matches. Leading up to the entrance of Azadi stadium the team buses must pass thousands of passionate soccer fans that were along the side and in the middle of the street. Total chaos.  The noise level is deafening during the entire match. Fanatical fans jumping up and down while chanting.  It’s simply wild. I believe the atmosphere created is much more than just cheering for soccer players. It’s an opportunity for Iranian people to express themselves in a manner that they otherwise would not be permitted to do in the streets. It’s a safe heaven. When you combine all these factors that affect an aggressive ambiance with high altitude conditions, you have your reason why most visiting teams can’t wait for the final whistle to blow and leave as soon as possible.

As an American, how were you treated there by the Iranian people?

I was treated with the utmost respect. I always felt safe and secure. Never had any issues of being Portuguese American.

The people are like many other people I’ve met in my lifetime around the world. The majority of the people have the same hopes, dreams and aspirations for themselves and families. They are very proud of their Persian civilization and history. The people are suffering from the extremism of their leaders and have a sensed hopelessness. The majority are victims of their regime, which they oppose but are fearful and powerless. They due talk so proudly of the past. My hope is that someday soon we can all cooperate so that all people can live in peace.

Did you ever get an opportunity to meet with Iran’s leaders? If so, what was your experience like?

Yes I did on several occasions.  They were ceremonial events in recognition of our successes. Iran politics understand and value the popularity of soccer in Iran.

Given the current political situation, how did you avoid politics in Iran, being an American?

My focus and duty were exclusively to concentrate on helping Iran National Team achieve their objectives. I am a professional coach not a politician. I was hired to help produce results on the field and not in the political arena.

Did you ever feel threatened because you were an American?

Did you have a favorite restaurant? What was the food like?

People would be surprised to know how many different styles of cuisine were offered in Tehran. There are various restaurants that satisfied our taste buds. Such as, Italian, French, Mexican, Indian and much more. Dining is a crucial aspect on how they socialize.

Why did you decide to go to Iran in the first place?

Professionally, it was an amazing challenge.  There is no bigger reward in soccer than helping a nation qualify for the World Cup.

Personally, I’ve always been adventurous. I’m intrigued by different cultures and customs. It was an opportunity to expand my knowledge in that part of the world.  Despite the experts advise, I accepted this journey and amazing adventure with no regrets. Qualifying Iran National Team twice for the World Cup is something I’m very proud of.

What type of relationship did you have with Carlos Queiroz?

We are professional associates and personal and family friends for over 25 years.

Intense with details, demanding and challenges all those around him. One of the most intelligent people I have ever worked with.

Would you work with Carlos again?

I am very grateful for the opportunities that coach Queiroz has presented to me. Many outstanding experiences and wonderful memories. It has been an honor and privilege to work with as well as the other quality staff members. Especially in professional soccer, no one can predict the future.

What will be your next challenge?

Put simply, my life and passion is and continues to be the game of soccer.  I‘ve always been blessed to be surrounded by people who had faith, confidence and who gave me the courage to pursue my dreams; people who gave me opportunities to learn and grow and who shared with me their wisdom and knowledge.  I’ve always tried to pay tribute to them and I believe the best way to do that is to share these experiences and philosophies with as many others as possible and hopefully, in the process see them and the game grow.

My lifelong dream; that of returning to America from overseas, so that I am able to share my unique experiences and knowledge and help develop and define further an American soccer culture. I always believed this was my destiny.

I am fortunate to have had the unique experiences to work on four continents at the highest levels of professional competition. I have had the honor and privilege of working with World Class coaches and players in high-pressure environments.

Participating in the 2012 South Africa World Cup and 2014 Brazil World Cup as well as assisting Iran in their 2018 Russia World Cup qualification combined with UEFA and Champions League competition were coaching milestones in my career.

I was also proud to be a U.S. Soccer technical consultant to Project 2010, commissioned by the United States Soccer Federation in 1998. As co-author of this document, this project charged us with the responsibility of developing a plan of organization, administration and execution of Project 2010 (Winning the World Cup) in connection with a national player identification and development plan that included scouting, and competition analysis, as well as coaching education as its major tenets.

Based on my standards of professionalism, enthusiasm, and dedication, I think I have worked hard to develop a comprehensive international and domestic soccer network; a network I also strongly believe would benefit those in my next opportunity.