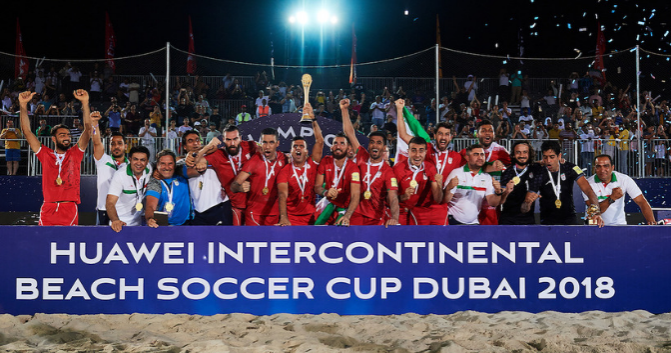 BeachSoccer - Iran are the 2018 champions of the 2018 Huawei Intercontinental Beach Soccer Cup in Dubai after a decisive win against, three-time champs, Russia.

The defending champions, and many people’s favourites, Brazil were knocked out in a nail-biting penalty shootout in the previous day’s semi-final, meaning that the final was to be decided between the only two other former champions.

Let’s get straight to it shall we….

The time had come. The moment the whole tournament had been building up too. One of these former champions would be re-crowned in today’s epic beach soccer bout.

Russia came into the final on the back of an historic victory against Gilberto’s Brazilians, putting a brutal end to an unbeaten run of 66 games, which had spanned several years.

But the defending champions were out, and today was all about Iran against Russia…

A hunger for victory was immediately apparent from the get-go as the pace of the game went from zero to one hundred instantaneously. It was Abbas Hashempour’s men who started the game on the front foot, as Kiani drove home a free-kick, which took a fortunate bobble to fly over Chuzhkov.

The Russian then had double the work to get back on level terms when Masoumizadeh stuck out a foot to redirect a stray shot into the Russian net. Iran were looking strong and wave after wave of attack fell upon Russia’s defense.

Behzadpour, the Iranian number 12 goalkeeper filling in for the injured Hosseini, sent a thunderbolt past his opposite number, but via the head of the Russian number six, Shishin, just before the break, and the first period ended at 3-0.

Mikhail Likhachev’s men had a mountain to climb as the second period began, but it didn’t take them long to take the first step as Paporotnyi struck within second of the whistle to reduce the deficit to two. 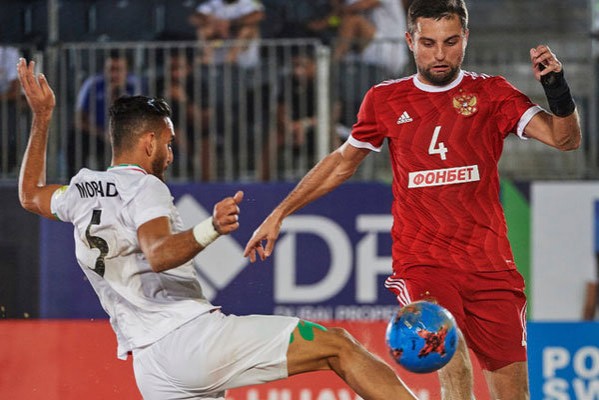 They kept up the pressure but Iran still controlled the flow of the game, taking their time in passing and using the keeper well to maintain possession. Russia created chances but when a second Russian, this time the captain Shkarin, turn into his own net. With the score sat at 4-1 to Iran, the second whistle blew just seconds later.

A chance to regroup for Russia and they built more pressure, flying up and down the sand like men on a mission – which indeed they were. Paporotnyi gave his side a glimmer of hope with five minutes to go by reducing the deficit to two, once more.

Russia ran the Iran defense into the ground, but as the clock ticked, the dream of reliving the 2013 success was within touching distance.

Then – the final whistle went, and the swarms of Iranian fans in the crowd, who had screamed their heroes on so passionately, were rewarded. The players ran in every direction celebrating wildly.

When the chaos died down a little the individual awards were presented by His Excellency Matar Al Tayar, Vice President of Dubai Sports Council. The Best Goalkeeper went to H. Behzadpour of Iran, Rodrigo won Top Scorer, with a total of eight goals, and the MVP went to Russian number 22, Zemskov.

Then, all that was left to do was celebrate wildly and pose for pictures with the triumphantly reclaimed trophy. The stands remained packed as the celebrations went on. A special night, belonging to a special team…Iran are back!