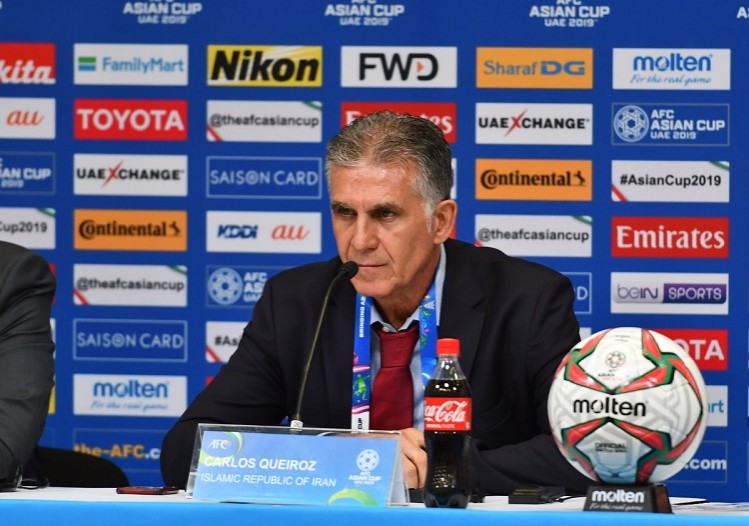 Tehran Times - Iran head coach Carlos Quieroz believes the impressive focus shown by his side played a major role in Monday’s 5-0 win over Yemen at the AFC Asian Cup UAE 2019.

In a tournament that has already witnessed several surprise results – notably Jordan’s defeat of Australia – the Portuguese tactician was thankful that the three-time champions of Asia avoided any sort of upset at the start of their Group D campaign.

“Of course, it is always good to win and have a positive result when you have scored plenty of goals, as it gives the team the perfect start in terms of motivation and confidence,” declared the former Real Madrid and Portugal boss.

“I really want to congratulate my players for the way they played. We are still at the beginning though and we are certainly not looking at results elsewhere as it is really none of our business.

“Having said that, some of the games we have seen so far have been, to be honest, a great lesson for Iran. I told my players that they had to focus on their first game, and some of the early results have proved that if you don’t play with focus any team [here in the UAE] can beat another."

The Iranians will seek to repeat their impressive win over Yemen when they face Vietnam on Sunday, with Queiroz believing that their early success was also down to an intensity to which the Yemenis had no answer.

“The match was a typical first game at a [major] competition as some players started a little nervously,” he said.


“However, I think after we began with such a high intensity, we started to force Yemen into mistakes and we were able to use that to our advantage.

"Fortunately, the first goal came early on and when that happens it is something which gives you confidence. We controlled the game for 90 minutes and we were the better team on the day."

Meanwhile, opposite number Jan Kocian remains optimistic that there is more to come from Yemen, who are making their debut in the competition as a unified nation.

“Iran are a team full of experienced players, some of who played in last year’s FIFA World Cup,” the Slovakian explained.

“We only had a short time to prepare and our players are not as experienced as our opponents. The real problem for us was the quick goals Iran scored [in the first half].