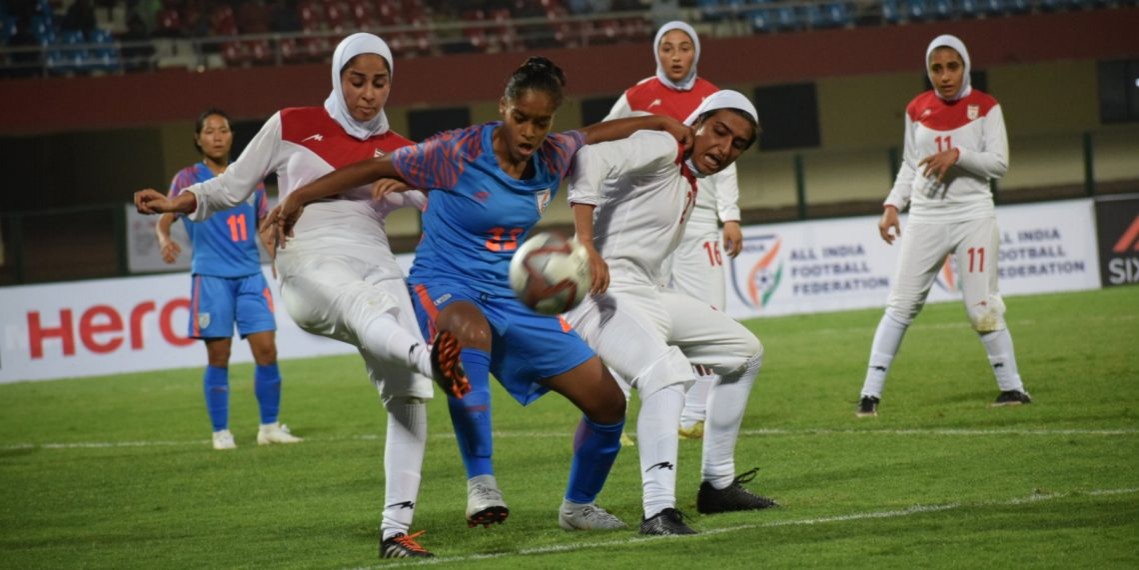 Orissapost - Anju Tamang’s second half strike made all the difference as India edged past a spirited Iran by a solitary goal in their opening match of the Women’s Gold Cup football tournament here at the Kalinga Stadium, Saturday.

India coach Maymol Rocky opted for a 4-4-2 formation keeping Dangmei Grace and Anju Tamang upfront while her counterpart Maryam Azmoun also opted for the 4-5-1 formation. This was also the two team’s first meeting in 11 years, the last being in 2008 which India won 2-0.

The Indians were right on the money as Dangmei Grace led the way with a brilliant solo run but Iran goalie Zahra Khajavi made a one-handed save to deny the hosts an early lead. Latching onto a ball from the centre Dangmei dribbled a couple of defenders before her not-so-powerful shot was parried away.

The hosts had a real golden chance in the 17th minute when Anju Tamang darting from the left met Ratanbala Devi in the centre, but the Manipuri midfielder’s left-footer curled wide of the far post. Thereafter the Indian girls did make repeated penetrations in the Iranian box but proved to be aimless.

The 44th ranked team could have gone ahead at the stroke of a half time but Khazavi made an important save following a howler to deny the hosts. The Iranian goalie first misjudged a long shot from Dangmei to somehow parry it away before blocking Ratanbala’s strike on the rebound.

Iran’s only chance in the first half came in the 45th minute when skipper Sara Ghomimarzdashti shot straight at the hands of Indian goalie Aditi Chauhan — the second time she got the ball in the whole opening 45 minutes. Credit should also be given to the Indian defenders who were alert all the time denying any damage.

The Indians finally broke the deadlock on the 48th minute when Anju slotted it inside an empty Iranian net much to the amazement of the handful of fans who thronged the stadium to watch their girls play. Latching onto a pass from the centre, Sanju darted on the left before passing it for the No.10 to tap in.


India pressed hard in the final 15 minutes in search of the second but luck wasn’t on their side. On 80 minutes a right-footer from Sanju found Khajavi on the line, she fisted, the ball hit the cross bar only to fall for an Iranian defender who cleared the ball to avert any further damage. India next play Nepal Monday, while Myanmar play Iran.

Bhubaneswar: Tournament favorites Myanmar also began their Women’s Gold Cup campaign on a rousing note as they proved costly against lower-ranked Nepal winning 3-0. Myanmar took the lead through Khin Moe Wai in the 44th minute. The 44th ranked team doubled their lead early in the second half with Win Thein Gi Tun making it 2-0 in the 54th minute before Moe Wai netted her second of the match in the 77th minute to finish the rout.