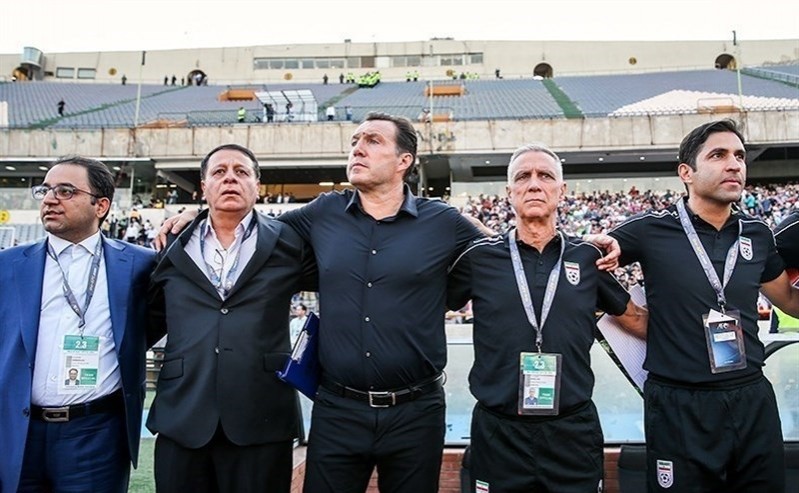 Tehran Times - It should have been the best of news, something to celebrate; instead, the Iranian football federation found itself confronted by a crisis. Marc Wilmots, who agreed to become the coach of the Iranian national football team On 15 May 2019, posted a cryptic tweet on Monday and claimed that “an intolerable situation” was created by Football Federation Islamic Republic of Iran (FFIRI) for himself and his staff

The Belgian who agreed a three years contract with FFIRI - after Portuguese coach Carlos Queiroz left the team after eight years in charge following Iran's semifinal exit in the Asian Cup - has suffered back-to-back defeats with Iran against Bahrain and Iraq in the 2022 World Cup qualification. Wilmots, 50, was appointed to qualify the country for the 2022 World Cup in Qatar. But after two defeats in four qualifying matches, Iran are only third in Group C. In addition, problems with the payment of Marc Wilmots's salary persist because of international banking sanctions on Iran.

When Wilmots was selected, the football federation claimed to have signed the best kind of contract with him, not only in terms of financial issues but also regarding the details such as how coaching staff should comply with the terms of the contract, most notably a sufficient time of presence of the manager in Iran. A particular subject of criticism in Carlos Queiroz era was that he did not spend enough time in Iran and most of the time of the year he preferred to live abroad.

But after a while it becomes clear that Wilmots would not agree to restrictions being placed on where he lives. He also accused the federation of serious contractual violations and in his bitter tweet wrote that his lawyers were working on the case.

All this shows that the Belgian and the Iranian Football Federation have reached an impasse in a short time. Nothing is clear at the moment about the future of cooperation between the two parties. Wilmots, an ex-politician, has never talked in such a way as to allow easy and accurate perception or interpretation for the public. However, from his recent tweet it could be understood that he is not going to continue working with Iranian football.

Lack of a certain strategy by the football federation and its inability to provide funds for a timely and regular payment of current expenses of national team have caused an unsightly situation for Team Melli.

Iranian Football Federation spokesman Amir Mehdi Alavi revealed in an TV interview that Wilmots had requested termination of his contract even before the match against Iraq.

The important question is how a manager with such an attitude is able to lead Team Melli to success? It should have been the news of victories with Wilmots for Team Melli but it seems that there is no end in sight to the turmoil at the Iran football national team.