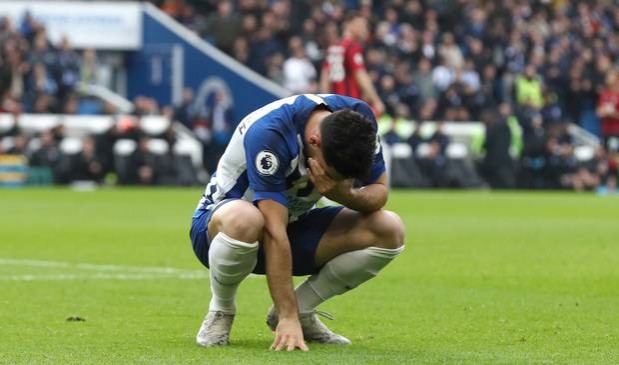 AP - Alireza Jahanbakhsh and Aaron Mooy scored their first goals for the club to help Brighton beat struggling Bournemouth 2-0 in the Premier League on Saturday.

Jahanbakhsh, the club’s record signing, put Brighton ahead after just three minutes and in doing so became the third Iranian player to score in England’s top division.

The forward joined after last year’s World Cup but did not score in 24 games during his first season with the Seagulls. He set his sights right when he swept home with his right foot from striker Neal Maupay’s astute pass.

The other Iranian scorers were midfielder Andranik Teymourian for Bolton in 2007 and attacking midfielder Ashkan Dejagah — Iran’s captain — for Fulham in 2014.

Mooy was Brighton’s best player and the Australia midfielder capped his performance with an expertly taken goal in the 79th, cushioning a ball from the left flank on his chest, cutting inside a defender and side-footing the ball into the top corner.

There were two video replay decisions in quick succession early in the second half. Bournemouth claims for a penalty were turned down in the 56th, after VAR ruled Lewis Dunk did not unfairly impede Dominic Solanke with his shoulder as he burst into the area and fell.

Brighton thought it had doubled its lead through defender Dan Burn in the 58th. Dunk’s volley hit Burn’s back and he reacted well to swivel, control the ball and finish.

But VAR ruled Burn was a fraction offside when Mooy’s initial cross came in.

The French striker Maupay has been excellent since joining from Brentford, where he netted 25 league goals in the second tier.

He is Brighton’s league top scorer with seven goals, and coach Graham Potter’s decision not to start him in the 2-1 defeat at Tottenham two days ago was to keep him fresh.

It paid off and Maupay was lively in the first half.

He set up the opener thanks to his ability to hold the ball up, teeing up Jahanbakhsh to shoot into the bottom corner, and had three shots on goal inside the first 20 minutes.

Bournemouth drew 1-1 at home to Arsenal on Boxing Day, with Jack Stacey setting up the goal. He went close to equalizing just before halftime, when his cross to the back post nearly went in.