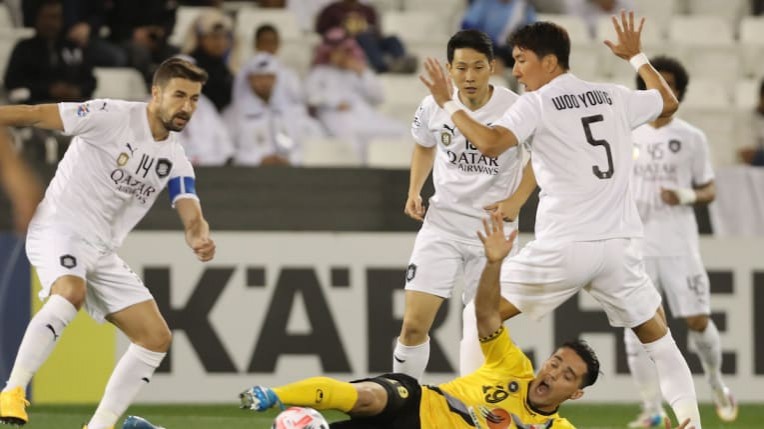 AFC - A terrific second half display helped Qatar’s Al Sadd SC climb to top spot of Group D with a 3-0 victory over Sepahan FC of Islamic Republic of Iran at Jassim Bin Hamad Stadium on Tuesday.

A brace from Hassan Al Haydos followed Akram Afif’s 51st-minute opener, as Sepahan were brought back down to earth after last week’s stunning 4-0 success away to Al Ain.

It was a match full of action from the opening whistle, with both sides producing several clear-cut scoring opportunities in a first half which, against all odds, finished without a goal.

Boualem Khoukhi’s pass put Afif through on goal in the opening 60 seconds, but goalkeeper Payam Niyazmand produced a terrific reflex save to keep out the first of three Al Sadd attempts in the opening six minutes.

The early minutes were promising ones for Xavi’s side, who regularly tested the visiting defence without managing to find the back of the net, with Sepahan captain Mehdi Kiani producing a terrific tackle to stop an Afif breakaway in the 18th minute, and Baghdad Bounedjah passing when he ought to have tried his luck shortly after.

Sepahan began to create encouraging openings of their own, and they made the best chance of the opening 45 minutes when Mohammad Mohebbi beat Saad Al Sheeb to a low Mohammadreza Hosseini cross, only to send his first-time effort narrowly wide of the net.

The pendulum continued to swing, but Al Sadd took control as the much went on, with the visitors finding increasingly difficult to contain their pace and movement.

A pair of impressive reflex saves from Niyazmand had denied Bounedjah just before the interval, but there was little he could do to prevent Al Sadd’s opening goal, with Afif cleverly lifting the ball over the towering shot-stopper after being released by a wonderfully weighted Bounedjah assist six minutes after the break.

Al Sadd’s second was a thing of beauty, with another flowing move culminating in a wonderful exchange between Bounedjah and Al Haydos; the former drilling in an inch perfect low cross, and the latter flicking the ball into the net with the back of his heel Gianfranco Zola-style to double the lead in the 72nd minute.

Al Haydos found the net again with a much simpler second six minutes later, this time steering the ball into an open net after more sparkling football from the hosts culminated in an inch-perfect square ball from Afif.

Al Sadd will face Al Ain away on March 3 while Sepahan will look to get back to winning ways against Al Nassr on the same day.

What happened to the sepahan full match? How come you guys didn’t post the full match only Persepolis?