Primetimezone - The Iranian Mehdi Taremi was the great figure in FC Porto’s victory at Tondela, by 3-1. The men of the house scored first, but soon they were reduced to ten elements and faced a truly deadly striker.

Taremi scored twice in the first half, scored another one in the second and drew natural numbers to the victory of the “dragons”, who were always superior, reacting immediately to the “insolence” of the Beira, who came to have an advantage.

At four minutes, he smelled the surprise, with the neto Borges goal for the men in the house, to head off a free kick taken by Salvador Agra.

However, this feeling did not last long, because Porto assumed the expenses early on. offensive and reached the tie at 20 minutes, by Mehdi Taremi, in FC Porto’s fifth shot, first with good direction.

Just before noon, Iker Undabarrena saw straight red, for catching Taremi at fault when he was going to isolate himself, after Eduardo Quaresma’s tremendous mistake.

With superior numbers, Porto pushed Tondela to their defensive third, won several free kicks in the frontal zone and reached 2-1 near the break with Taremi scoring twice in the reload of Trigueira’s incomplete defense, who failed to block Uribe’s relatively weak free-kick.

The differences between the first and second half were not substantial, except for the goals. The natural recoil of the Tondela removed room for maneuver to the “dragons” and reduced the number of dangerous incursions from the Beiras near the Diogo Costa area.

The third of the white and blue came only after 80 minutes, when Fábio Vieira found Taremi in the area and the Iranian did not reject the possibility of making a “hat-trick”. The result was done, as Porto reduced the intensity, satisfied with the advantage achieved. 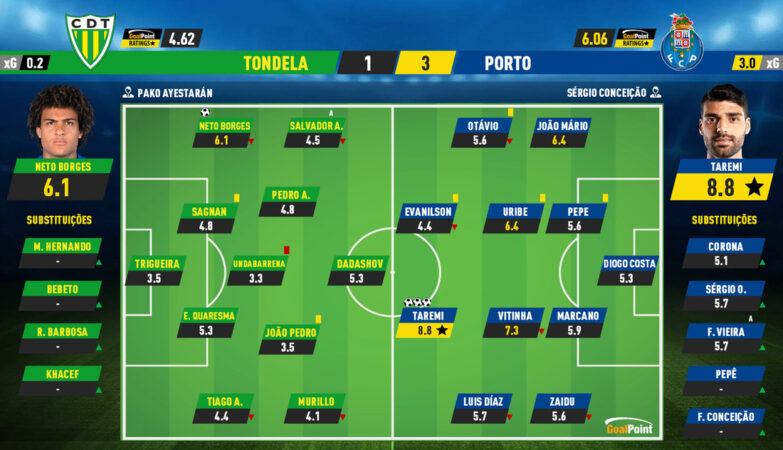 Best in the Field

The night was Taremi. The Iranian striker pulled the limelight to him, assuming all the offensive expenses of the “blues-and-whites” with the first hat-trick recorded this season in the Bwin League.

In addition to the three goals, Mehdi was the top finisher, with five shots, squared four and registered seven actions with the ball in the Beira area. Your GoalPoint Rating from 8.8 it is not higher only because it wasted a glaring occasion.