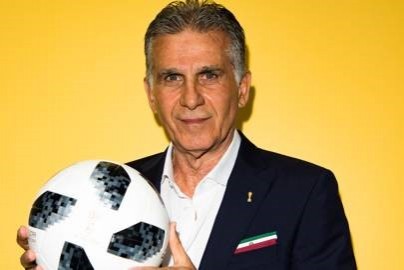 As it was confirmed about two months ago, Carlos Queiroz who is the Iranian National football team head coach will remain in this capacity (Team Melli head coach), until 2019 when the Asian Football Confederation (AFC) Asian Cup culminates.

The 64-year-old Portuguese might not be the world’s best football coach; however, he resonates well with Iranians thanks to his dedication to his job, and he is not corrupt. He does deserve every penny he gets from the 2 million odd Euros he receives an annual salary for his role as head coach. I will not be using a matchbook sign up offer to place a wager on him bringing home trophies in his first year in charge but he may well surprise everyone.

After the expiry of his contract at the end of the 2018 World Cup in mid-July, there was a back and forth tussle between him and the Iranian Sports federation about extending his contract.

Reports then indicated that the issue was concerning his wanting to depart from this role due to more lucrative deals laid on his feet by other Asian and African teams.

However, the two parties were able to meet and agree on an extension of six more months where Queiroz will remain at the helm of the Iranian team until the conclusion of the 2019 AFC Asian Cup.

Iranian Deputy Minister of Sports (Mohammad Reza Davarzani) confirmed that the government was in full support of the decisions made by the Football Federation of the Islamic Republic of Iran.

The highly awaited 2019 AFC Asian Cup that will be the 17th chapter of the quadrennial International Men’s football championship of Asia will commence from January 5th and conclude on February 1st, 2019. The football tournament will be held in the UAE (United Arab Emirates).

However, Queiroz only agreed to extend his contract with the Iranian football federation for an additional six months until the culmination of the 2019 tournament.

Team Melli Makes History Team Melli booked themselves for the FIFA World Cup finals two consecutive times thanks to the efforts from their head coach Carlos Queiroz the 64-year-old Portuguese coach who is also a darling of the Iranian football fans.

June 25, 2018, was a bitter-sweet moment for the Iranian national football team, first; they failed to make it to the 2018 World Cup knockout stage, however; the team will go down history lane for bagging in four major points for the first time in such a huge international sporting tournament.

At the pick of the World Cup knockout stages, Iran managed to get a 1-1 draw with A Selecção, (Portuguese National Football Team) a match that was played in the Mordovia Arena.

Queiroz team did their very best to hold their defense making it impossible for Portugal to score against them, well until the 45th minute. Portugal’s Ricardo Quaresma circumnavigated Team Melli to break the deadlock by scoring on the tournament’s amazing goals.  The Portuguese managed to hit the ball with his right foot making it curl past Alireza Beiranvand.

Before the Iranian team could strategize, eight minutes after the commencement of the second half, Cristiano Ronaldo almost doubled A Selecção, lead after he took the penalty awarded by the video assistant referee. However; to his dismay, Beiranvand saved the day by deflecting Ronaldo’s penalty kick.

Iran collected the crucial point when they were awarded a penalty kick. The award was given when the VAR review proved that Cedric Soares from the Portuguese national team committed a handball in the box during the stoppage time. Team Melli’s Karim Ansarifard’s powerful kick buried the ball in the upper right corner of the goal. Iran almost got in a second goal; unfortunately, Mehdi Taremi miscalculated (Got nervous maybe) and missed his chance.