City beat Wellington Phoenix 2-1 on Saturday night – the first of their three games in eight days – while Melbourne Victory drew 1-1 with Central Coast Mariners to kick off their run of three matches in seven days.

Arzani came on for City in the 53rd minute with his side 1-0 down and assisted both of Ross McCormack's goals. The 19-year-old dazzled with his dribbling and attacking prowess.

His introduction was a welcome injection of impetus for a City team that mostly laboured through a dull 90-minute performance.

Coach Warren Joyce was pressed after the game on why Arzani didn't start and explained that he needed to build up fitness lost in the pre-season because of two Australian youth team camps.

The Iranian-born Arzani told Fairfax Media on Sunday that early season illness also added to his lack of match condition, but said he was now primed for peak performance.

"I am ready now," Arzani said. "I think my readiness to start has only come about recently just because my season, especially pre-season and beginning of the season, was really interrupted by two Australian camps (U20s and U23s).

"Now I have reached a point where my levels are good enough to start. It took a lot of hard running." 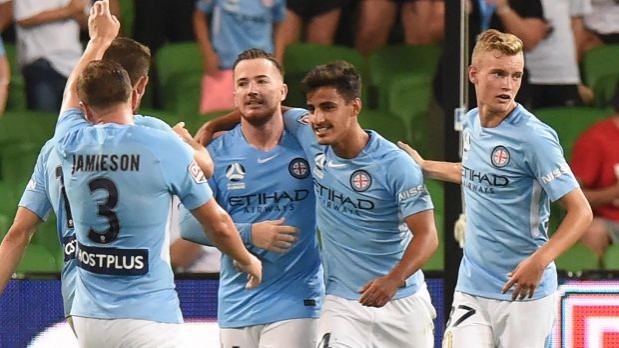 He added that City would not struggle physically through its packed schedule, which includes an away clash against Perth Glory on Tuesday and then a home match against the Mariners on Sunday.

"Knowing the gaffer [coach] that we have, we are all very fit, we have very resilient bodies. Fitness shouldn't be an issue for us," Arzani said.

"I doubt that will be an issue [three games in eight days]. That's a credit to the gaffer, he has taken us into the pre-season and he has absolutely hammered us and now it's paying dividends for us."

Tim Cahill took Arzani under his wing during his time at Melbourne City. The 19-year-old has never started for City, appearing nine times off the bench since joining last season.

Cahill still speaks to Arzani even though he left City and the winger also credits Joyce as being a big help in his development.

"He [Joyce] is perfect with me," Arzani said. "He's quite strict on me and I think I need that as a player. He is always on my back and that helps me so much because growing up as a player – because I had a little bit of talent – I could get away with certain things. But in a professional environment you can't.

"It's been the best thing for me. Bad habits, especially defensively. If I want to take my career further and play in Europe I really need to listen to the things Warren is saying."

Meanwhile, Victory coach Kevin Muscat didn't let the possibility of fatigue influence his approach to their draw with the Mariners and won't when planning for their glut of games.

"I was concentrating on tonight [not on the fixture]," Muscat said on Saturday. "Naturally we have a couple more bodies in the squad from during the week [new signings Dino Djulbic and Terry Antonis] and certain players get through different aerobic and anaerobic workloads ... first and foremost we wanted to put on a performance tonight."

Muscat said Djulbic should be fine to back up against Wellington Phoenix in New Zealand on Wednesday but Antonis still had more fitness work to do. Rhys Williams will return from suspension while captain Carl Valeri will miss the game through suspension.

That means Mark Milligan will likely move back into midfield and Djulbic will retain his spot in the starting line-up, unless Leigh Broxham is brought in.