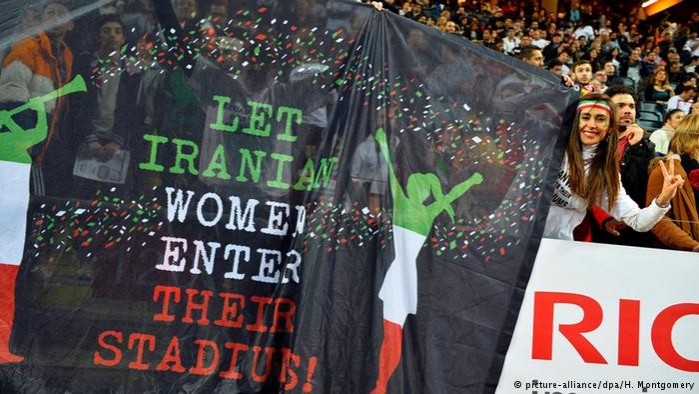 Scoop - The International Trade Union Confederation (ITUC), along with several union and civil society organisations, is calling on FIFA to ensure that its human rights policy is fully respected, and ensure that Iran ends its ban on women attending men’s football matches.

The ITUC and the Building and Woodworkers’ International BWI, Human Rights Watch, the Centre for Human Rights in Iran and Football Supporters Europe have launched an online petition calling for FIFA to uphold its anti-discrimination statute and human rights policy.

“The workers who build stadiums and bring global sporting events to life are the people whose human and trade union rights are put at risk by these events, and the fans who go to matches all depend on the pledges that international sports federations are making to protect their rights. Iran’s ban on women spectators is a flagrant violation of FIFA’s non-discrimination rules, and severely undermines the protection that its human rights policy should ensure,” said ITUC General Secretary Sharan Burrow.

Despite years of vague promises, the Iranian authorities have failed to end the ban on women. On 1 March this year, 35 women were arrested outside the Azadi Stadium in Tehran when they tried to enter the stadium to join the 95,000-strong all-male crowd, which included FIFA President Gianni Infantino. A promise made to Infantino by Iranian President Hassan Rouhani to end the gender ban has still not been fulfilled.

“Iran has an appalling human rights record, for labour rights abuses, discrimination against women, violations of freedom of speech and lack of freedom of association, and it is ranked in Category 5 ‘no guarantee of rights’ in the ITUC’s Global Rights Index. Workers involved in independent trade union activity face severe repression, including imprisonment on false charges. Since the beginning of the year, dozens of Iranian women who have protested against compulsory clothing rules have been arrested and face serious charges. With the Iran team competing in the men’s World Cup in Russia just a few weeks away, now is the time for FIFA to take a stand and push back against repression and discrimination,” said Burrow.

We must tell FIFA Iran must play by the rules and end the ban on women in stadiums before the World Cup’s opening ceremony. Sign the petition in support of all female Iranian football fans!