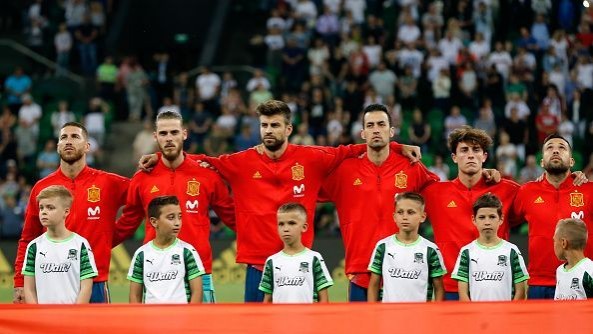 Reuters – Spain came through a tough World Cup opener against Portugal in impressive style as the aftershocks of the sacking of their coach were still reverberating and they will need to keep the pedal firmly to the floor when they meet Iran on Wednesday.

The thrilling 3-3 draw with Portugal in Sochi eased concerns that Julen Lopetegui’s sudden departure would derail Spain’s campaign and reports coming out of the camp indicate an upbeat mood under his makeshift replacement Fernando Hierro.

On paper, Spain should be able to deal comfortably with Iran in the first meeting between the two countries but Germany’s loss to Mexico in the first match of their title defence on Sunday was a warning to all the game’s heavyweights.

“What happened to Germany could happen to anyone,” Hierro told reporters on Monday.

“The 32 teams here are very good and the first game is always tough. Anxiety plays a big role. We got a point against the European champions and now we’ve got Iran …”

If there were causes of anxiety for Hierro they might be in the form of goalkeeper David de Gea, who made an uncharacteristic blunder to gift Cristiano Ronaldo one of his three goals in Sochi.

Defender Nacho Fernandez also had a mixed night with a brilliant goal making up for giving away a penalty and Dani Carvajal could be fit again to offer Hierro another option at right back.

Hierro’s main concern, however, will be that Spain are able to break down an obdurate Iranian defence that conceded only five times in 18 qualifiers and get the goals they need to give them the best chance of topping Group B.

The disruptions to Iran’s preparations for the tournament were more geo-political in nature with U.S. sanctions against the nation costing them a couple of their warm-up matches and their kit deal with Nike.

They needed a late own goal to beat Morocco in their opener last Friday but their real work starts in Kazan, where they play the first match in a double-header against Iberian teams with Portugal to follow five days later.

Coach Carlos Queiroz, the former Real Madrid boss, will be able to recall Saeid Ezatolahi after the holding midfielder, dubbed the ‘Persian Pogba’, missed the Morocco match through suspension.

Injury concerns over midfielder Omid Ebrahimi and prolific striker Alireza Jahanbakhsh have also eased but central defender Rouzbeh Cheshmi is a major doubt because of a muscle injury.

Queiroz’s tactic against the North Africans was to frustrate the opposition in the hopes of triggering a “mental collapse” but the Portuguese admitted they would need a very different approach for the 2010 world champions.

“Against Spain, everybody from the goalkeeper to the striker can create things, so we need to think of a different strategy,” he said.