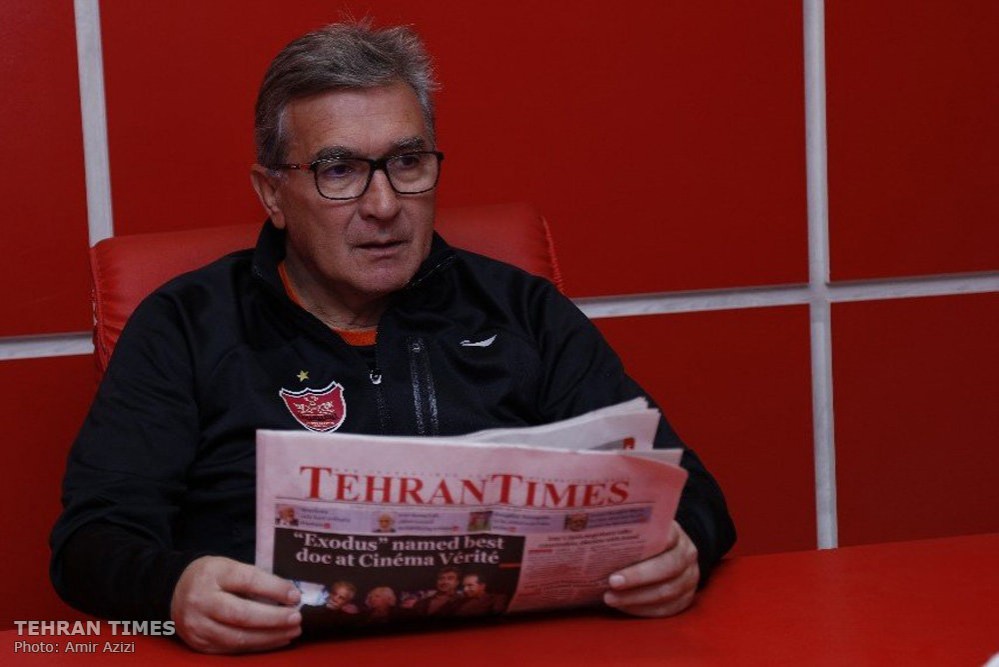 Tehran Times - Having a smile on his face, Branko Ivankovic welcomed us warmly in Shahid Kazemi Stadium in southern Tehran.

The 64-year-old coach has stolen the show with four titles in Iran. Ivankovic has won back-to-back Iran Professional League title and two Super Cups. Persepolis reached the final of the Champions League for the first time since the tournament started in 2003 under the Croat’s leadership.

By demonstrating patience, Ivankovic has proved himself as of one of the world’s greatest coaches. He never fusses about lack of financial support or the ban of transferring players in the two transfer windows.

He had already inspired Iran U23 football team to title in the 2002 Asian Games.

Coach Ivankovic still is hungry to win more and says he is not finished yet with football.

His football philosophy and aggressive style, has changed Persepolis into a team with winning mindset, a team to beat.

It's no secret that the recipe for success is perseverance as well as hard work, sacrifice, and above all love.

Ivankovic says he wants to leave the legacy of love and passion in the world.

In his recent interview with the Tehran Times, Ivankovic said Iranian players are very talented and valuable with great potential.

Following is the full text of the interview with Branko Ivankovic.

Q. Persepolis can sign new players after the transfer bans finishes in January. The strategy has both pros and cons. The team has accomplished much so far that injection of new players can negatively impact the team’s adjustment.

A. I completely agree with you because signing the new players should be done with a lot of accuracy. It takes time for a new player to adjust himself with a team. Soroush Rafiei, who is one of our new players, has previously played in Persepolis. Mehdi Sharifi loves Persepolis and has preferred to be without a team for six months to join us. And we have also signed Saipa striker Mehdi Torabi who has already showed everyone how good he is. We have already investigated about the players who have joined us. The character of a player is very important to us. We need three more players but I have to say finding the new player is not an easy job. We need time to find our options. In addition to technical skills, we need players with good character. In the past three years, we have worked together to achieve a common goal. The most important thing is no player is bigger than the club.

Q. Godwin Mensha played a major part in Persepolis reaching the final of the Champions League for the first time since the tournament started in 2003. He also was an important player for your team in finishing the first half of the season as one the leaders. However, the Nigerian striker has failed to meet the expectations since he has reached 1,000 minutes without scoring for Persepolis.

A. I don’t like to talk about the performance of a player separately. Each player has his own task onto the field but I have to say Mensha needs the goals which help him end his scoring drought.

Q. Persepolis are favorites to win three cups. You have won back-to-back Iran league title and want to claim it for the third successive year. Persepolis will take part at the Asian Champions League as runners-up and can win the prestigious continental cup for the first time as well as the Hazfi Cup.

A. We reached the semifinals of the AFC Champions League for the second year in a row and it’s while Saudi Arabia’s Al Hilal failed to qualify for the knockout stage as the competition’s runners-up. As you said, we are favorites to win the Iran league title for the third year in a row. We also want to win Iran’s Hazfi Cup. Persepolis has won Super Cup so far and will try to win trophies. All of us know what we are searching for. Unfortunately, we narrowly missed the chance to win the ACL title, but we want to win it in the upcoming season. We lead the table in the league and want to win Hazfi Cup, these are our goals for this season.

A. No, I didn’t organize the meeting, but I think the cooperation between Iran and Croatia can be helpful for both countries. Iran and Croatia should exchange experience in the sports field and exchange of athletes, coaches, teachers and sports knowledge, especially in football and water sports. Our water polo and handball are among the world’s best teams. Croatia has also 10 players in NBA. Discus thrower Sandra Perkovic is a two-time Olympic champion as well. Mr. Salehi Amiri has also held a meeting with President of the Croatian Football Federation Davor Suker. He is my close friend and wanted me to take charge of Croatia national football team, but I turned down the offer.

Q. One-fourth of the current coaches in the Iranian league, namely Ali Daei, Javad Nekounam, Yahya Golmohammadi and Ali karimi have been your players in the past years. It seems they follow in your footsteps in their coaching program.

A. I am very happy they have chosen the coaching and want to pass on their experience to the players. Saipa coach Ali Daei is a great player who can be president of Iran football federation and also head of Asian Football Confederation. However, he has decided to coach the players. Ali Karimi, Javad Nekounam and Yahya Golmohammadi were also great players. I congratulate them and wish them all the best. I know that coaching is a very tough job with a lot of bumps in the road.

Q.  What made you decide to coach Persepolis Football Club?

A. The main reason was that I had earlier worked in Iran as national team head coach and figured that in four years we could get the best results with Team Melli. We qualified for the World Cup 2006 and came third in the AFC Asian Cup 2004 while we deserved to go to the final of that tournament. Since I left Iran, we have had several negotiations with Persepolis during those years, and they sent some offers to convince me to come to Persepolis, I think it was two or three times. Of course, there were logical reason to refuse offers every time, because I was under contract with other clubs, and I did not want to cancel my contract, because I believe that I should do my best wherever I am. Finally, the last time that we negotiated, we could sign a contract, and I think they chose me because of my successful career with Croatia and Iran national teams, and also as a successful club head coach who had good experiences in Saudi Arabia, the UAE, China and Croatia. Now, it is four years that we have cooperated with each other and it is continued.

Q. Did change the players’ exercise regimen as well as their nutrition program?

A. Yes. When a new coach comes in, he sees the problems of the team from his own point of view. Each and every manager has his own benchmarks for preparing the team. I don’t want to talk about the coaches before myself, but I set my own standards, and I always try to raise these standards. I think all parts of team preparation program are important: physical, tactical, and technical. We worked on all of them. We did not make any special change to the diet of the players, because most of Iranian foods are of high quality and have the necessary vitamins or proteins. In addition, sudden changes in food habits of players may have a negative effect. But we always insist that players manage their lifestyle.

Q. Which one is more important: a defensive game or offensive attack?

A. I want both of them in my team because neither can be separated from the game. A team must be strong in all areas. Besides, through training I always try to make a team play with creativity and beauty but without individual show-off by players. All the players should work for the team and not for themselves.  I prefer to get the ideal result by mastering the game. That's my philosophy and my way of football.


Q. Johan Cruyff once said that in a game if plan A didn’t work he tried to perfect that plan and wouldn’t go to plan B. What is your opinion?

A good team must have a basic method of play, as well as an alternative method. Of course, this alternative plan should not be such that it differs180 degrees from the basic team plan. For example, in one game Bashar Resan (the Iraqi midfielder) was out, and we played with a linear midfield formation, but in the next game we shifted to a midfield diamond. These are some of the tactical details that we change, but the main style of the game would not change.  I will train my players so that they can play at least two positions. Now in Persepolis Shoja' Khalilzadeh, Mohsen Rabikhah, Siamak Nemati and other players play in two and even more positions. 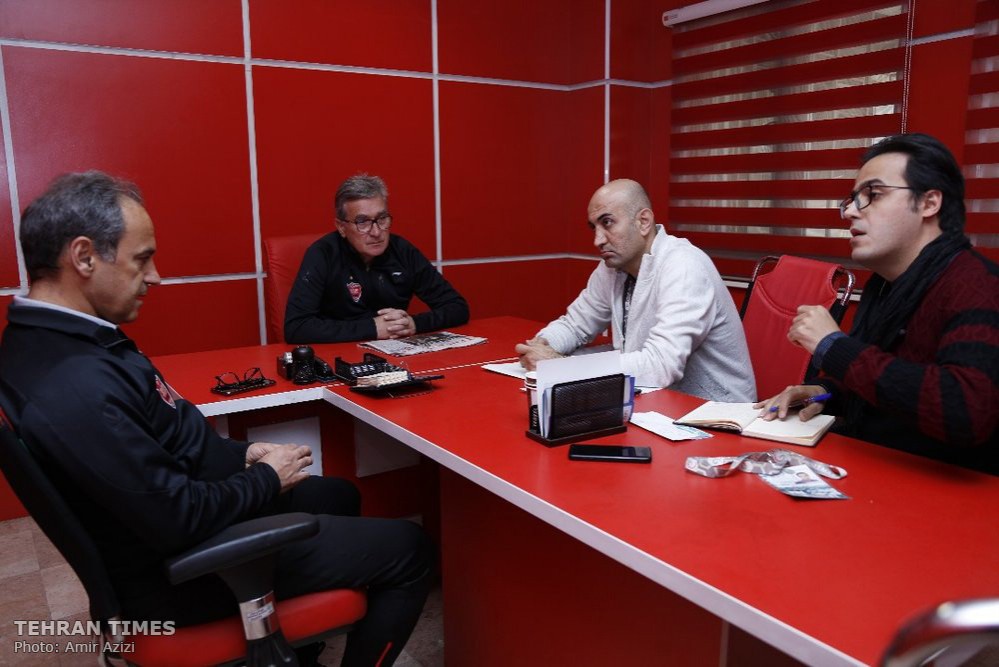 Q. You have worked in Croatia, Saudi Arabia, the United Arab Emirates, China and Iran. What differences and similarities have you seen in these countries’ football?

A. Of course, there are some differences. What's clear is that Iranian players have great talent and are very valuable players and are interested in working hard and they show their enthusiasm in training and in the games.  Iranian players have huge potential to get the best results. In countries such as Saudi Arabia, the United Arab Emirates and China, the quality of football teams are largely dependent on foreign players. Some of those players cost about $20 million. In those countries the budget of one club is more than the total budget of several Iranian clubs. There is also a budget problem in Croatian football, and players prefer to play abroad and leave Croatia.

Q. How far do you want to go with Persepolis team? When you arrived the team’s ranking was 12 and now it is a champion in Iran and runner-up in AFC Champions League.

A. I believe that the best is yet to come from Persepolis, and we can improve many aspects of our game. We still have a lot of work ahead to build the club structure, as well as select good players for the team. We are going to train players who originated from inside Persepolis and for this goal, we want to build a professional and powerful youth academy for the club. In fact, this is a process that continues and is unstoppable.

Q. What is the second thing you like most after football? What would you do if you couldn’t teach football any longer?

A. I am a football coach as well as a fitness coach. In addition, I’ve been teaching in school for five years. Anyway, I would stay in sports and work with kids as a skiing or swimming specialist. I don’t see myself out of sports even if there would be no football in my life.

Q. You talked about kids. When you look back at Branko’s childhood especially when he was a teenager what do you see? How much of him is still left in you?

A. Sports and street games. Sport is something that has stayed with me from my childhood till now. Meanwhile, I was also a professional chess player and became the champion of our city two or three times. Generally speaking, my entire life has been around and about sports. Today, my best friends share a history of over 50 years of friendship between us. We are all sportsmen.

Q. What would you like your legacy to be, as a football coach, and as an individual?