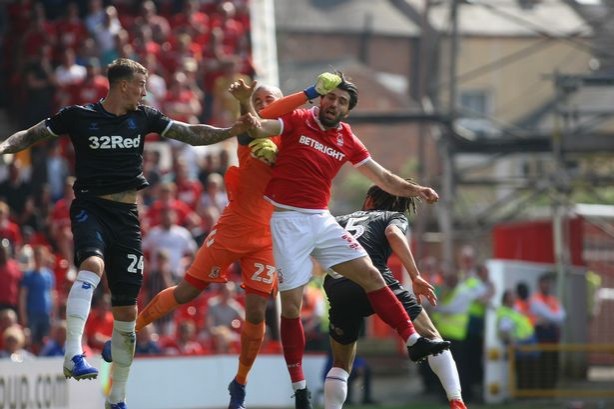 Footballleagueworld - Nottingham Forest ran out comfortable 3-0 winners against Middlesbrough on Monday, with the Reds dominating the game from start to finish.

A brace from Joe Lolley and a late goal from Alexander Milosevic proved to be enough for Martin O’Neill’s side on the day.

The Forest boss made a number of changes to his starting XI as he keeps his squad fresh in a busy period of the season, and one player that came into the squad was Karim Ansarifard who started the game up-front ahead of Lewis Grabban and Daryl Murphy.

Ansarifard took to Instagram following the win and praised the Nottingham Forest supporters for their contribution in helping the team over the line on the day.

Ansarifard put in a solid display against Boro, but was unable to get his name on the scoresheet and was substituted after shortly after the hour mark for Lewis Grabban.

He’ll be hoping that he can be given a consistent run in the Forest starting XI heading towards the conclusion of this year’s campaign though, with Forest not having anything to play for now.

This was only his second league start of the season, in a disappointing spell with the Reds since arriving in the summer of 2018 after being released from Greek side, Olympiacos.

Nottingham Forest are next in action against QPR at the weekend, in a game where they’ll be hoping to come out with three points against a QPR side that have struggled towards the back end of this season.

It has been a season to forget for Ansarifard.

He’s only made 11 appearances in total for the Reds, and he’ll be keen to put this disappointing spell behind him at the earliest of opportunities.

He’ll be keen to keep the pressure on Lewis Grabban for a starting spot in the Nottingham Forest team next season, where they’ll be hoping to be challenging for a top six finish.