AFC - Islamic Republic of Iran’s Zobahan FC secured top spot Group A of the 2019 AFC Champion League after playing out a 0-0 draw with Saudi Arabia’s Al Nasr at the Grand Hamad Stadium on Wednesday.

The rescheduled Matchday Six fixture had been supposed to take place a week earlier in Karbala, but due to security concerns, it was postponed and moved to Qatar.

Both teams had already advanced to the next stage, so it was an opportunity for the two managers to experiment with their choices in what was the last fixture of their respective seasons.

Al Nassr wasted no time in taking the attacking initiative in the opening minutes and had a golden chance to translate their early dominance into a goal.

Hamed Al Mansour advanced down the right and crossed low for Abdullah Al Salim who had the goal at his mercy, but somehow managed to squander the chance, sending the ball inches wide off the post under little pressure in the seventh minute.

Zobahan had to wait until halfway through the first half to get their first shot on target. Ghasem Hadadifar supplied a through pass for overlapping defender Vahid Mohammadzadeh, but onrushing Al Nassr goalkeeper Zaid Al Bawardi blocked the angle to send the Iranian’s shot behind for a corner kick. 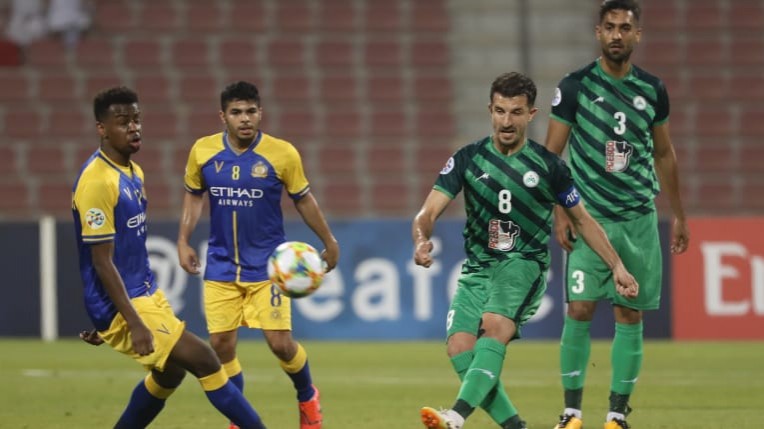 The corner would prove to be the best chance of the half for Alireza Mansourian’s men. Mohammad Reza Hosseini swung his cross past everyone for Hadi Mohammadi who met it with a powerful header that he just could not direct goalward.

As they did in the first half, Al Nassr looked to find a break early on after the restart. Abdullah Al Khaibari tested Mohammad Bagher Sadeghi from distance and Fahad bin Jumayah curled from the edge of the box, forcing a reflex save out of the Zobahan goalkeeper.

At the other end, Hosseini collected Mohammadi’s pass and advanced into the box from the right, but his drilled effort was saved at the near post by Al Bawardi.

Despite five minutes of added time, there would be no goals at either end and the two sides shared the spoils with Zobahan advancing as group winners, setting up a Round of 16 clash with another Saudi team; Al Ittihad. Al Nassr will face Group B toppers; Al Wahda of the UAE.